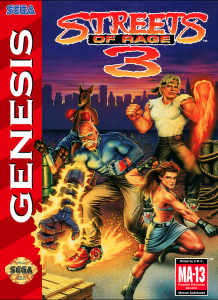 Released in late 1994 Streets of Rage 3 was the final game in the legendary series and despite being a decent game it is easily my least favourite of the 3.
Firstly the good points, graphically the game is superb with massive sprites and very colourful and detailed backgrounds. The actual stages themselves are also impressive ranging from a seedy nightclub, a construction site and even an elevator.
The basic gameplay is unchanged from the first 2 games which is no bad thing and there is a extra character to play as (Dr. Zan), he is a sort of half man half robot and as a result he is much stronger than the other guys which helps to change the style of gameplay slightly which is always welcome.
Now the bad points, for starters the game seem about 20% slower than the earlier games and this really took some of the frantic fun away from the experience. 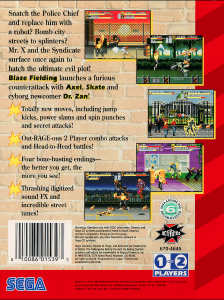 Also the soundtrack is terrible, a real shame as the previous games had amazing soundtracks (Streets of Rage 2 especially). Finally for whatever reason there seems to be less variety in bad guys, the game constantly throws the same 2 to 3 types of villains at you which grows old very quickly.
Despite these flaws the game is still enjoyable and I would recommend this to any fans of the earlier games, sadly this game is expensive and hard to find for the Megadrive but it is available for download on PSN or Xbox Live for a few pounds.