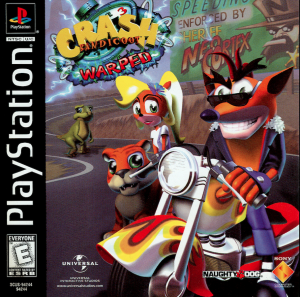 Released in late 1998 Crash Bandicoot 3: Warped was the final game in the series created and developed by Naughty Dog (not including spin off games such as Crash Bash and Crash Team Racing), and what a way to exit! This game is superb.
This game has all the best points of the previous Crash Bandicoot games such as the awesome pick up and play game mechanics and inventive level design whilst adding excellent new gameplay styles like bonus levels where Crash can fly a plane or ride a jet ski.
These new bonus levels were so popular with fans that it led directly to the release of Crash Team Racing (essentially an excellent Mario Kart style racer with characters and locations from the Crash Bandicoot universe).
The difficulty level is perfect here (I felt that the previous game was too hard) with a stronger emphasis on puzzle solving, you can also chose the order of how you tackle the levels as in the earlier games. 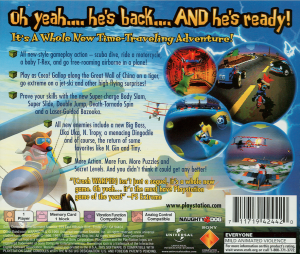 All in all I would say this game is one of the finest platformer’s of all time and is an essential purchase for any Playstation owner, it is available to download on the PS3 store for less than a fiver, must buy!