Night Warriors – Darkstalker’s Revenge was released for the Sega Saturn in 1996 and is an absolutely fantastic 2d beat em up. 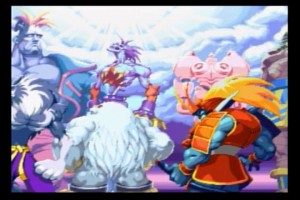 The gameplay is very similar to the Street Fighter Alpha series (no surprise as this game is also made by Capcom) but the difference here is rather than using the likes of Ryu, Guile and Ken you have access to a wide range of supernatural based characters (including a Yeti and Vampire hunter).
The graphics are superb with massive colourful sprites and fantastic backgrounds full of detail and colour, the animations are among the best I have ever seen on the console. The sound effects and music are also suitably macabre.
Overall I would say that 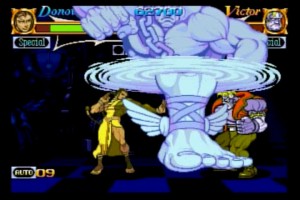 Street Fighter Alpha 2 apart, this is the best 2d fighter on the Sega saturn. As a side note this game is actually the second in the Darkstalker series and is a Saturn exclusive. The original game was a Playstation exclusive and bizarrely so is the third and final game. Confused? Yeah, me too.