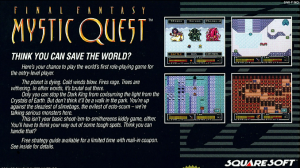 Published by Square in 1992, Mystic Quest is known as “The beginner’s Final Fantasy” or beginner’s RPG in general. Our protagonist, Benjamin is given the quest to save elemental crystals to restore balance to the world. Reviving and saving crystals from falling into the wrong hands is a staple to Final Fantasy storytelling. Apart from that feature, Mystic Quest does not share many of the same elements as other titles in the franchise.
One of the main differences between this and other FF’s is the battle system. Mystic Quest does not use “random encounter” battle mode. Instead, we see the monsters on screen before entering battle, giving the player the opportunity to heal up and prepare for the fight. This is a bit of a welcome relief if you’re used to the usual “screen zooms in and BAM! A battle!” scenario. The actual fighting is fairly simple as well. One thing I appreciate in Mystic Quest is the degeneration of the monsters as they take more damage. Creatures will begin looking a little more ragged as the battle goes on, some of them pretty comical looking.

As Bejamin makes his way around the world, he meets up with a few supporting characters. After encountering these characters, he picks up new weapons such as bombs and claws. All the areas and towns of the Mystic Quest world are so different from one another. Fireburg, atown located underground acutally has electricity with neon lights on the signs, which is uncommon in RPG’s of this era.
As always, I always mention great RPG soundtracks and Mystic Quest is no exception. I love the music in this game. The general feel of the soundtrack is a little more on the rock side, especially the battle theme. However, the music is soft and atmospheric when it needs to be, epecially in places such as the Frozen Cave where even the music sounds cold!
I know this game recieved less than stellar feedback when it was first published, but I believe this game serves it’s purpse as a stepping stone for players who want to take the plunge into 16 bit RPG’s. I still enjoy playing this ever few years. It’s fun, it dosen’t take a long time to play and it’s entertaining with straighforward gameplay and a great soundtrack.