Konami, Inc.
Developed by
Konami Co., Ltd.
Released
1992
Also For
Arcade
Being a huge fan of The original cartoon series I was very excited at the release of Teenage Mutant Ninja Turtles: Turtles in Time on the Super Nintendo. 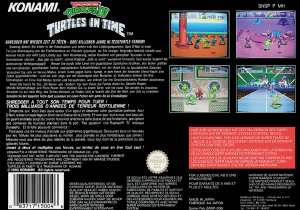 This game is absolutely fantastic, for many many reasons. Firstly the graphics are fantastic! Massive chunky detailed sprites, bright vivid backgrounds and superb animations. Also worth mentioning is the incredible 3d scaling effects, where you can throw an enemy into the screen (not possible on the Megadrive due to the lack of Mode 7).
The sound is also brilliant with great sound effects and music and best of all the gameplay is amazing, essentially a scrolling beat em up similar to Final Fight or Streets of Rage. 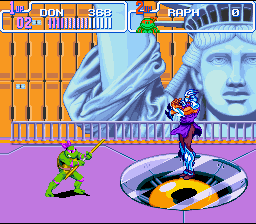 However, compared to most scrolling beat em ups the advantage here is the extra attack moves on offer (partly as you can control any one of the 4 Turtles). The game also offers some of the best multiplayer fun you can have on the Super Nes.
The only negative here is that like all games of this genre the action can get a little too repetitive, especially on the later levels.
Overall I would say this is the greatest scrolling beat em up on the Super Nintendo (even better than Final Fight) and is an essential purchase for TMNT fans and fans of the genre. Sadly though buying a copy of this game can be very pricey today with copies going for over £100 on ebay. Good hunting!