SEGA of America, Inc.
Developed by
Sega AM9 R&D Division
Released
Nov 27, 1999
Also For
Arcade, Windows
Sega Rally 2 was launched alongside the Dreamcast console in Europe in October 1999, a sequel to the classic Sega Saturn game. 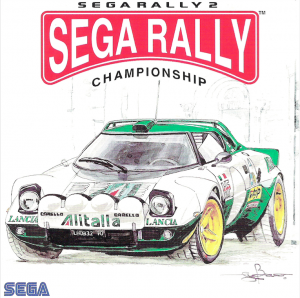 This game is fun but really compared to its predecessor it has to be seen as something of a disappointment. Firstly the good points, the graphics are excellent (especially for a console launch title), textbook Sega chunky cars and colourful blue sky and backgrounds.
There are many more tracks to enjoy this time around, the music is very catchy and there is even a career mode of sorts ( via a 10 year Championship option).
Now the bad points, the game has several technical problems including inconsistent frame rate (especially on the snow levels), occasional glitchy scenery, boring and bland tracks and worse of all very bad control’s (most of the time I just can’t keep the car on the track). 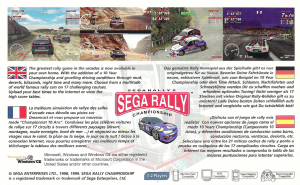 Despite the many problems with this game I would still recommend this game to fans of the Genre, but don’t go into it thinking it is anywhere near as good as the Saturn game.