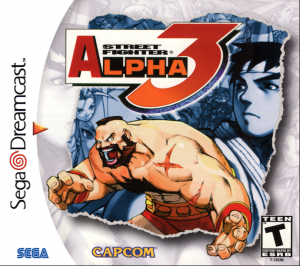 The Sega Dreamcast was home to a great many high quality beat em ups, one of the very best was Street Fighter Alpha 3 released in the summer of 2000.
This was the last of the Alpha series and is probably the best, this game has everything you could want from a one on one 2d fighter.
Firstly the graphics are lovely, massive sprites full of life with magnificent backdrops full of colour and detail, the roster is massive featuring 25 fighters from both the Street Fighter and Final Fight universe. The soundtrack is superb featuring remixed versions of Street Fighter
2 tunes and some original scores also.
The major difference between this game and the previous Alpha games is the addition of different fighting styles, the player can use A-ISM,V-ISM and X-ISM. This greatly affects how your fighter can perform, influencing his or her power, move set and sometimes even changing your finishing combo. 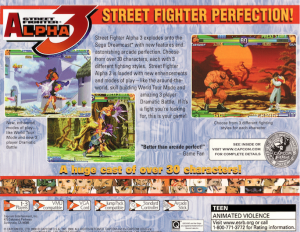 If you are a fan of 2d beat em ups you simply must own this game, sadly the Dreamcast version is expensive (often selling for over £30 on ebay) but if you have a Playstation 2 you can pick this up for a few pounds on the Street Fighter Alpha Anthology.