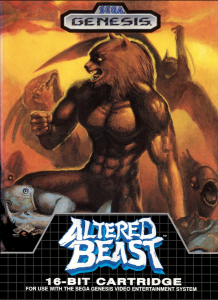 Before the launch of Sonic The Hedgehog in 1991 Sega’s Megadrive console came bundled with Altered Beast in Europe
and the USA. As a result a great many gamer’s first taste of the 16 bit machine was with this game and overall it left a positive impression.

Essentially Altered Beast is an arcade style scrolling fighter where your character (a roman soldier) has to fight all manner of ghastly beasts to rescue the kidnapped daughter of Zeus.

The graphics are excellent for the time, with huge sprites and a very large amount of bad guys on the screen at once all moving very quickly. The sound quality is also excellent with some very impressive speech from the end of level guardians. 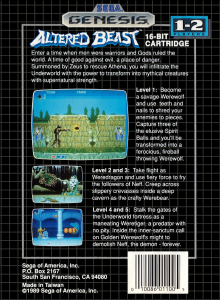 The game has some excellent power ups available to aid your quest including the ability to transform into a werewolf, a
bear and a sort of dragon and they are needed as the game is pretty tough.

One of the few negatives in this game is the slightly poor collision detection where your character clearly avoids an attack but you take the hit anyway. Despite this Altered Beast is an excellent game and I would recommend it to any Megadrive owner, especially as it is so easy to find and so cheap.