Released in 1995 Donkey Kong Country 2: Diddy Kong’s Quest is the follow up to the immensely successful Donkey Kong 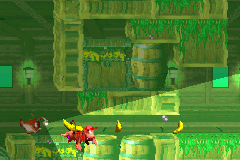 Country released the year earlier (both for the Super Nes).
This game improved on the already fantastic original by upping the difficulty level, offering a new character (Dixie Kong who replaces Donkey Kong who was kidnapped), speeding up the gameplay and adding even more variety to the levels (such as on board pirate vessels’, inside a volcano, a haunted theme park and inside a bee’s nest).
The Kong’s animals friends have returned along with some new additions including a cheerful bouncing snake, a web firing tarantula and a parrot who fires pellets. 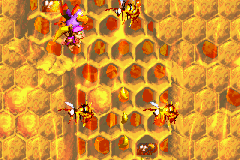 The graphics somehow look even better than the original with stunning colours and large vibrant well animated sprites and the sound is superb with awesome tunes and some of the best sound effects on cartridge.
The only downside is that unlike the first game you must pay to save your progress with coins that you find within the levels. This leads to much frustration as you often have to backtrack after you have finished a level to find a coin to save your game.
That aside, this is a fantastic game and if you enjoyed the original you simply must own this game, recommended.