Published by
Nintendo of America Inc.

The second game in the “Gaia Trilogy (preceded by Soul Blazer) Illusion of Gaia was released by Quintet for the Super Nintendo in 1994. Known as Illusion of Time in Europe,  IoG takes place on a fantasy version of Earth. Will is our main character, and he meets a girl named Kara. After will accidentally finds himself in a dimension called “dark space” he meets 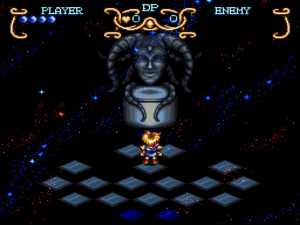 and enitity called “Gaia”. Gaia appoints Will the task of saving the Earth from an approaching evil comet that is actually a weapon. This weapon re appears every so often during the Earth’s various ages, preventing mankind from advancing their civilizations.
Although Will is what is considered our main character, he actually transforms into other beings. A dark knight named Freedan, and a light being named Shadow. Throughout the game, the main objective is to collect ancient statues. And much like Soul Blazer, these items are the key to opening the gate to the final area of the game and facing Dark Gaia. Interestingly, Dark Gaia is basically the same enemy as Deathtoll from Soul Blazer.
Quintet stepped up their game since Soul Blazer. Graphics were more detailed, the soundtrack was on par for games of that time, and combat is a bit more thought-out.
I have always enjoyed games that use a touch of real-world history, and Illusion of Gaia does just that. The Pyramids, The Great Wall of China, and the Incan ruins are just a few of the places Will must 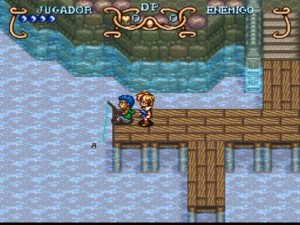 travel on his journey. I’m a history buff, so games like this are extra fun for me!