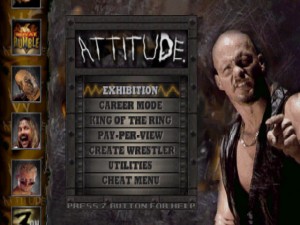 Warzone was a really good wrestling game for it’s time and Attitude improves things even more. Graphics are sharper with very detailed sprites and decent animations and superb entrance video’s for the wrestlers.

The music and sound effects are also excellent with 2 man commentary also added (although not very good), the roster of fighters has been beefed up massively with over 40 different wrestlers (including Stone Cold Steve Austin, The Rock, The Undertaker, Kane and Triple H).

The in ring action has been improved with less collision detection problems and overall a much smoother experience and my personal favourite feature from the last game ‘Create a Wrestler’ has returned with more options than ever (for the first time ever in a wrestling game a created fighter looked just as good as an official fighter).

It’s not all good news though. The finishing moves are just too hard too pull off requiring complex button inputs at exactly 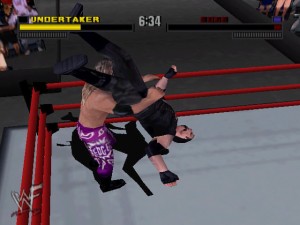 the right time, as a result I think the more casual fans will find it too challenging and move on to something else. That aside this is one of the very best Wrestling games released on the original Playstation and a great way for Acclaim to sign off from making WWF games.