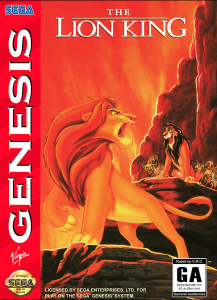 During the first half of the 1990’s Sega’s Megadrive  was home to many classic Disney related platformers, including Mickey Mouse in Castle of Illusion and Aladdin. The Lion King released
in late 1994 (along with the movie) is yet another.
Developed by Virgin Interactive (who also developed Aladdin) this game has much to enjoy. Firstly the graphics are lovely, very colourful backgrounds and well animated sprites really bring the game to life. The gameplay is excellent also with a main character (Simba) who has a range of special abilities from jumping on baddies when he is a cub to simply roaring at the bad guys to scare them away when he is a fully grown lion in the latter stages of the game. The music is first rate with all of the tunes from the movie lovingly recreated (such as the Circle of Life). 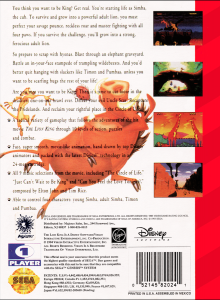 This game places slightly more emphasis on puzzle solving than most other platformer’s of the day
which helps make the game stand out from the crowd.
If you liked Aladdin you will love The Lion King, this is one of the best Megadrive games ever, must buy!