Manx TT Super Bike was released for the Sega Saturn in 1997, sadly by this stage the console’s time was coming to an end, 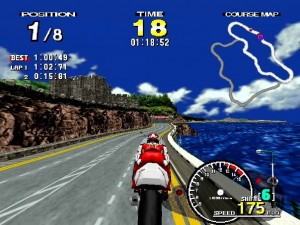 as a result many gamer’s have never played it. That is a real shame as this game is a real treat very much up there with Sega’s other greats such as Virtua Racing and Daytona Usa.
This game has superb graphics and sound (especially the clearly drunk commentator), the gameplay is excellent with very responsible controls and the game has a very 1990’s style slickness to it that you just do not see anymore with the very dull sim racers of today.
There are only 2 tracks sadly, but both of them are excellent and very different in style and layout. In addition to the arcade mode there is also a time trial mode and a challenge mode to keep you coming back for more. This game also supports 2 player split screen mode with no screen tear, pop up or slowdown (a massive achievement given the Saturn’s problems with handling 3d).
The only downside with this game is the difficulty. I love a challenge but I found this game nearly impossible in challenge mode, no matter how well I drive I cannot get near finishing the track with the limited time given (maybe just me). 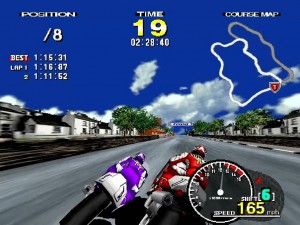 Despite that I would recommend this game to any Saturn owners out there, this game is fantastic arcade fun and is easily available and only cost’s a few pounds.