Legend of Legaia was created by Contrail and released for the Playstation in 1998. The game takes place in a world called Legaia, in which the entire world has been plagued with an evil 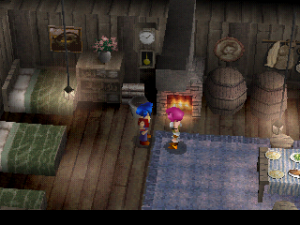 mist. The mist turns once friendly creatures called Seru (which can bond with humans and give them extrordinary powers) into monsters that continually attack Legaia’s citizens. On a side note: Seru look like M.O.U.S.E.R.S from Teenage Mutant Ninja Turtles.
We begin in a town called Rim Elm with a character named Vahn. Vahn joins with two others: Noa, a wild, pink haired girl who has been training with Terra,  one of the friendly Ra- Seru; and Gala the monk. Together, the party figures out that this mist is coming from man-made generators. They also work to revive Genesis Trees across the world that have the ability to keep the mist away.
Without giving away spoilers, time travel is an integral part of the storyline as Vahn, Noa and Gala travel to the past and attempt to stop the mist generators before they decimate civilization. The story dosen’t end there, however as there are many more twists to the story after this point. Let’s just say what happens in the past follows them into the future. 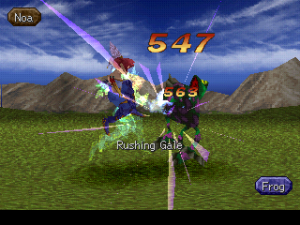 I really REALLY enjoy the battle system. It is turn based, but instead of the usual “Fight” command that simply exectues a weapon strike, the player uses “Tactical Arts”. With this feature, the player selects “Right” “left” “high” and “low” commands that allow the characters to throw punches and kicks in a fighting game style. With the right moves, your characters can do combos that deal more damage.  It keeps battle interesting and forces the player to think things through without random button mashing.
I highly reccomend playing Legend of Legaia to live this story for yourself, it is one rollercoaster ride!