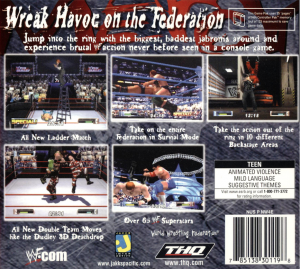 Being A massive fan of pro wrestling I have played just about every wrestling game from the Snes up to the Ps4, and out of all of them I rate this game the best. No Mercy was released by
THQ in November 2000, it was their 4th wrestling game for the N64 (after wcw world tour, wcw revenge and wwf wrestle mania 2000) and by far the best of the bunch. What makes this game so awesome is the control system, it is so simple to use press one button to grab an opponent and then press another to do a move (this was an era where other wrestling games had very complicated combo systems for moves like WWF Attitude) as well as the amazing create a wrestler mode. Infact so good is the creation mode you can easily make all of today’s stars to keep the game up to date. The only downer is when the game was first released it had a bug where you could not save your progress, THQ released an updated cart a few weeks later and everyone that bought the game at launch was offered a free exchange. This
game really captures the excitement and wackiness of the attitude era and the spirit of the Monday Night Wars from the late 1990’s, this game is roughly 1 million % better than the rubbish Ps4 game and in my opinion is one of the very best N64 games (especially in multiplayer).