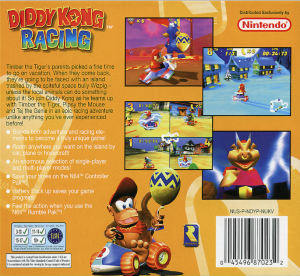 Soon after I bought an N64 I started looking for a racing game. The first game I thought of was Mario Kart 64 as I loved the Super Nes game so much. However, I was persuaded by a
friend to instead try Diddy Kong Racing as it offered more content for a single player and boy was I glad I did. This game is superb, offering lovely cartoon graphics, simple and fun gameplay and fantastic responsible controls. Unlike Mario Kart 64 Diddy Kong Racing offers the
option of different vehicles for certain levels (such as a hovercraft for water based levels and a plane for the open levels) as well as a fantastic story mode where you have to win races to get balloons to open more tracks and unlock playable boss characters to use in multiplayer. This game also marked the debut for several iconic characters such as Conker (Conkers Bad Fur Day) and Banjo (BanjoKazooie). Overall I would say this is one of my favourite racing games ever and maybe the best racing game on the N64