Released in the autumn of 1995, Wipeout was the game 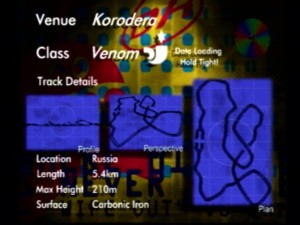 which made gaming officially cool! Before the released of Wipeout, the perception was that video games were played in the bedroom by children and were not mainstream.

Wipeout changed all that, for the first time video game adverts were appearing in magazines such as ‘Loaded’ and were being played at nightclubs and swanky wine bars (not that I would know).

How about the game itself? Well the gameplay is terrific, essentially a more violent version of Nintendo’s F zero you race with futuristic spacecraft over extreme terrain. The main difference between this game and F Zero is the addition of weapons in Wipeout and very powerful ones at that. One weapon literally rips up the track in front of you and upends any vehicle in the way. Another sends out multiple pulses and they zero in on any rivals in the locality. 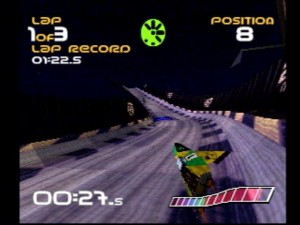 Graphically the game is stunning, incredible backdrops and fantastic vehicles that move around faster than any other racer available at that time. The music was another high point, largely Techno based it was so popular that it was released on cd shortly afterwards.

All in all this game was another reason why the Sony Playstation was such a staggering success story, if you enjoy racing games you must pick this up.