Wave Race 64 is sure to provide some of the most exciting racing you’ve ever experienced. Feel the pounding and crashing of the waves as you accelerate into straight-aways, whip around the marker buoys and go airborne on the jump ramps. Don’t race alone! Challenge a friend.

Wave Race 64 was released alongside the N64 console in Europe back in the spring of 1997 and for me it is one of the very best games available on the machine. 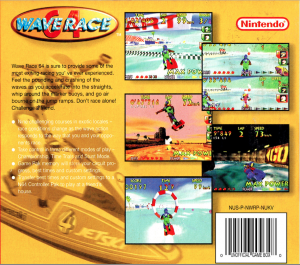 For starters the graphics are totally awesome! The water effects are unreal (especially the choppiness of the water), the vehicles are very well animated along with the riders and the locations the game takes you to are amazing (including an industrial port, a quiet lake, a sunny beach and my favourite a city bay at night).
The sound effects are fantastic, especially when you consider this game is on cartridge and not cd. The best part though is the gameplay itself.
The handling of the vehicles is spot on, very comfortable and very arcade (just how I like it). You
can change the settings of each course to decide how choppy the water is going to be which changes the gameplay massively. The game also offer a great challenge as not only are you racing against several cpu riders but you must slalom in and out of the coloured buoys in order to maintain your speed.
Any negatives? Well the only thing I could think of is the appalling commentator. He has a very annoying voice and he says the same 3 or 4 lines over and over. Sadly you cannot turn him off either. Despite this Wave race 64 is one of the best N64 games ever released and if you own a N64 you owe it to yourself to pick this game up.