You’re taking a Tahoe 155 snowboard down a steep, bumpy incline at night and you’re about to top off an Indy Nosebone with a 360° Air, and you haven’t even left your living room! You’re playing 1080° (Ten Eighty) Snowboarding, a game so intense you’ll be brushing the snow off your goggles. With five different boarders, eight different Lamar® snowboards, more than 25 tricks, a Half-Pipe and six different courses, this is as close as you’ll get to the real thing without hopping on the next ski lift. 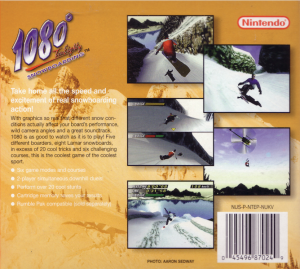 Released in late 1998, 1080 Snowboarding on the N64 is for me the best snowboarding game of all time. The reasons? Well, this game has everything, amazing graphics (especially for the

There is so much to do on this game, including standard racing, time trials, half pipes, slalom events, long jumps and an excellent 2 player mode.
Any Negatives? No many but one would be the inconsistent sound. True that the N64 struggles with sound compared to the Playstation and Saturn due to using cartridges rather than discs, but still the menu music is truly horrid! The sound effects by contrast are very cool (especially the crunchy sound you get when your snowboard goes over thick and fresh snow).
There were great snowboarding games before 1080 Snowboarding, games such as Cool Boarder’s on the original Playstation and the SSX series on the Playstation 2 but none come close to this game. If you enjoy snowboarding games or even if you normally don’t please try this game.