I have always been a massive fan of one on one beat em ups, from the moment I first played Street Fighter 2 in the arcades. 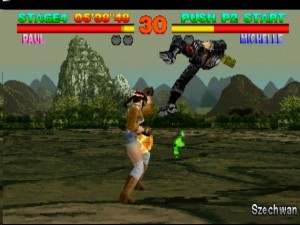 For me back in the 90s I always looked at the selection of beat em ups on a console before deciding whether or not to buy one. On the Super Nes and Mega Drive there was Mortal Kombat and Street Fighter, the Saturn had Virtua Fighter and the Playstation had Tekken. On the face of it Tekken is similar to Sega’s Virtua Fighter, a 3d fighter with texture mapped polygons. However, Tekken is actually very different to Sega’s game once you play it. Firstly Tekken has a much easier control system enabling even novice players to pull off special moves pretty easily (good news for me). Also The ca 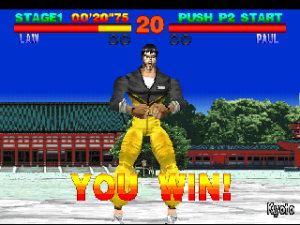 mera rotates more during the fight giving a more 3d experience and the punches and kicks have more impact which makes the game feel more realistic. This game went on to have 2 sequels on the original Playstation and several more on the Ps2 and Ps3. If you have any interest in one on one beat em ups you simply must try this..FIGHT!!!