Eric Bowden Review
Released alongside the Super Nintendo in Europe in the spring of 1992, this was actually the first Mario game that I ever 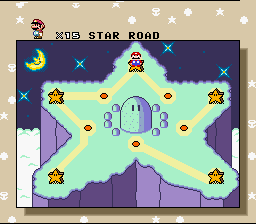 played (I never owned a Nes).
To say I was impressed would be a massive understatement! The gameplay is absolutely fantastic with precise controls and some very creative level designs. The graphics are much improved over the earlier Nes games with huge sprites, amazingly colourful backgrounds and fantastic animations.
Mario has several new moves at his disposal here, including the ability to fly, throw turtles and best of all ride around on a very cute dinosaur named Yoshi (you 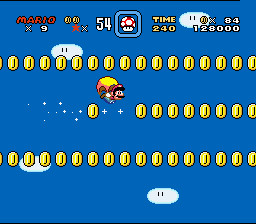 may have heard of him).
Overall this is one of the greatest platform games of all time and if you own a Snes you simply must pick this up.
Nicole Moyers Review

Super Mario was the Super Nintendo’s Entertainment System’s pack-in game (unless you got the All-Stars promotion which came with both cartridges, like I did) was obvious the best selling game for the system… What makes this game so special?

As a pack-in game, we got to see what a technological wonder for 1991 as we saw more color and better graphics as 16 bits vs. 8-bit glory that the Nintendo Entertainment System saw. We see 96 great levels with the debut of everyone’s favorite green dinosaur named Yoshi, who will in turn will have cameos in future titles in Nintendo’s staple franchises.

The Special World brings us eight of the toughest levels that we have seen on a 2D platform. Once this is completed, Dinosaur Land goes from a spring palate to fall and some of the enemies change to reflect (as does the ending credits)

As a retro/indie site, this is worth a try on the emulator/SNES/GBA so download today!