Released in late 1996, Fighting Vipers is one of the best Sega Saturn fighting games ever released. You would be forgiven for thinking this game is very similar to Virtua Fighter, but after 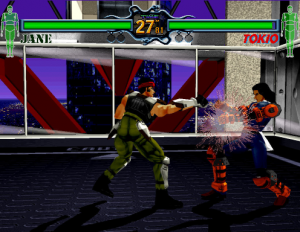 playing for a while you will notice several differences.
Firstly all the characters are wearing protective armour plates, and before you can beat your opponent you really need to knock off their armour. At the top of the screen next to the energy bar is a small diagram of each fighter, this shows where you need to hit in order to destroy their armour and gain an advantage.
Another key difference is that each fight takes place in an enclosed arena (usually with walls or fencing around it), it is possible to smash your opponent into the wall and even smash them through the wall if you do it hard enough and in the right spot.
The gameplay also seems to be 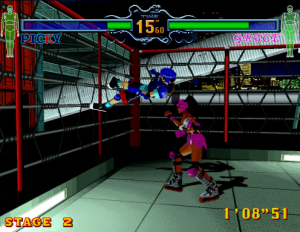 much faster than Virtua Fighter and is certainly more violent with blood being spilt in also every bout. The graphics are excellent (especially for a console which usually struggles with 3d) and the sound is also fantastic. Overall I would say this game is well worth picking up even if you are not a massive fan of beat em ups as this one is so charming it may convert you.