It’s the greatest racing adventure of all time!

Players have dropped the checkered flag and Super Mario Kart has crossed the finish line as one of the best Super NES games of all time! Better yet, the Super Mario GoKart Park is still open for tons of racing fun! Hit the track with Mario, Luigi, Yoshi and the Princess. Get tough and lock fenders with Donkey Kong, Jr. and Bowser. Even Toad and Koopa Troopa will mix it up in an all-out quest for the Gold Cup! Race head-to-head with a friend or challenge the computer in great, split-screen Mode 7 graphics.

Feel like a bit less speed and a lot more strategy?

Take a crack at the Battle Mode! In four different maze-like courses you’ll use Koopa shells, Banana Peels, Super Stars and other wacky weapons to burst your opponents’ target balloons and triumph!

Released alongside the Super Nintendo in Europe in the spring of 1992, this was actually the first Mario game that I ever 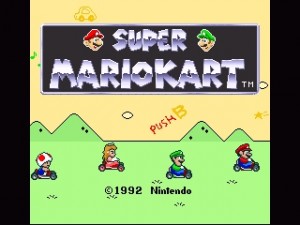 played (I never owned a Nes).
To say I was impressed would be a massive understatement! The gameplay is absolutely fantastic with precise controls and some very creative level designs. The graphics are much improved over the earlier Nes games with huge sprites, amazingly colourful backgrounds and fantastic animations.
Mario has several new moves at his disposal here, including the ability to fly, throw turtles and best of all ride around on a very cute dinosaur named Yoshi (you may have heard of him). 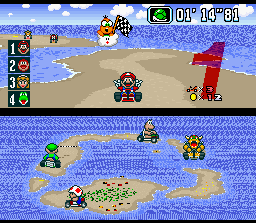 Overall this is one of the greatest platform games of all time and if you own a Snes you simply must pick this up.