Street Fighter Alpha 2 came out for the Saturn in late 1996. To be honest when it first came out I ignored it! Capcom had released 7 different Street Fighter games in just 4 years and sales 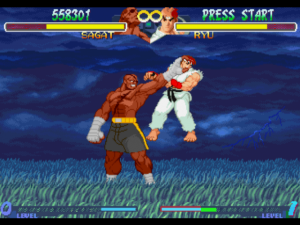 were declining as a result. I did read in the magazines of the time that it was a fantastic game and when I finally picked it up a few years back I have to say they were right. This game combines the pick and and play fun of Street Fighter 2 and the more combo and technique based gameplay of the Snk games like King of Fighters. The game also combines the best of the Street Fighter cast along with characters from Capcom’s other famous fighter Final Fight. This game was also available on the Playstation but the Saturn version is much better with

improved graphics, extra animations and faster load times (proving that whilst the Saturn was no match for the Playstation in 3d, when it came to 2d the Saturn was king). For me this is probably the best ever 2d fighter, the only drawback is the price of the game, it usually costs around £30 to buy this game due to its limited print run. Still highly recommended