They say never judge a book by it’s cover and that has never more true than with Daytona Usa on the Sega Saturn.  When this game was released back in the summer of 1995 it looked 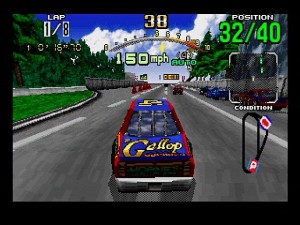 terrible, the graphics suffered from low resolution, random pop up and awful glitches. It was made even worse by comparing it to the sublime Playstation conversion of Ridge Racer.
However, once you get past these issues the gameplay is fantastic. Ported over to the Saturn by Sega’s own AM2 team from the Arcade original, 100% of the gameplay is intact. The handling of the cars is superb partly down to the lovely Saturn pad and the tracks are designed magnificently.
I must also mention 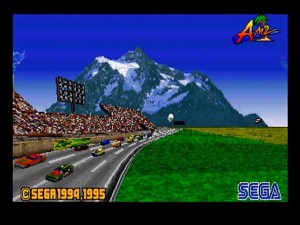 the music, I think the best way to describe it would be it’s so bad it’s good! Even now years later I find myself humming the main tune whilst I am in the shower (not a nice thought)! Despite the many issues with the game I have always found the chunky colourfulness of Daytona enchanting.
I would say that Sega Rally aside this is the best racing game on the Saturn and it is incredibly cheap and easy to find.