Being a massive fan of 2d platform games on the 16 bit consoles I was very excited to try one on the 32 bit machines and my first experience of one was on the Sega Saturn. To be totally 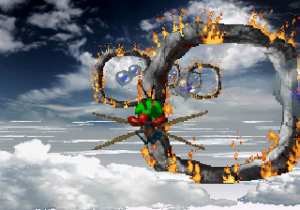 honest Bug is a bit of a mixed bag.
Firstly the graphics are disappointing, I am sure the game could have been released on the Megadrive or Snes to be honest. Infact I would say the graphics are worst than Donkey Kong Country (Snes) and Earthworm Jim (Megadrive).
There are some nice effects in semi 3d where your character can walk into and out of the screen but hardly pushing the  Impressive 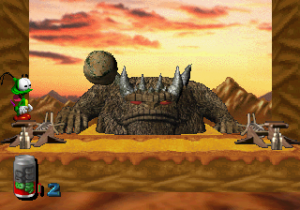 hardware. The sound is also very poor with terrible tunes and annoying voice overs really putting a downer on things.
On the positive side I found the gameplay to be classic Sega, really simple, really fun with a comfortable control system. The levels were also really fun to complete and the game has some of the best end of level boss characters I have ever seen (especially a massive octopus who chucks fish at you).
Overall I would recommend Bug to all fans of the genre, but I would say that Clockwork Knight is a far better 2d platformer on the Saturn and would advise picking that game up first.