CANNON FODDER
WAR HAS NEVER BEEN SO MUCH FUN!

From a queue of some 360 eager conscripts waiting to go to war, you’ll hand pick 15 of them to volunteer for each mission. Shoot anything that moves, throw grenades, shoot bazookas, drive tanks, fly choppers, and die as you guide your troop of no-hopers through twenty-four missions, each with a different terrain and objective.

Developed by Sensible Software, Cannon Fodder is a classic game that contains all the elements of great gameplay that Sensible fans have come to expect.

If you like maiming, killing and mindless violence, here’s your chance to wipe out all 360 men in your own army, not to mention the enemy. War has never been so much fun!

I had played it previous on my brothers amiga and instantly fell in love with the game – sensi soccer with guns!

After the hub screen of ‘boot hill’ – still bare of the hundreds of tombstones that will soon adorn it – ends and the game kicks in, the soundtrack blares as an attack chopper drops you off to do your thing.

The mission premise were always simple – kill everything, blow up all the buildings and generally don’t get killed. Easily said than done because as with old gen games – the difficulty after it lulled you into a false sense of security was insane. It literally was one bullet one kill, for your troops and theirs.

You grew an affinity to your original three guys – Jops, Jools and Stoo, it truely is a sad moment when one of them gets popped off by a stray tank or you
don’t notice that trip wire. It really makes you want to play Candle in the Wind when you get back to Boot Hill and have a little funeral for them.

Another quality feature for the snes version – full mouse support! Yep that rather pointless device actually had the dust blown off it. The only let down for the version was the opening title song that was missing from the amiga version – war ‘literally’ has never been so much fun. 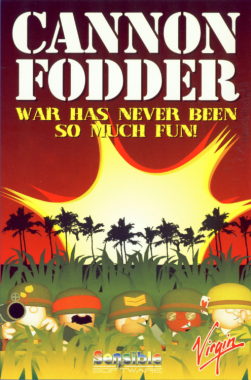