Way back in 1992 the gaming world was getting ready for the super nintendo version of the arcade classic Street Fighter 2
World Warriors. I had played the game at our local arcades and as soon as the snes version came out I bought it and loved it. But to be honest my favourite version of Street Fighter 2 is the megadrive version which was released a year later. On the face of it’s the same game as the snes sequel Street Fighter 2 Hyper Fighting but it has several upgrades over the snes game including the ability to play with up to x10 speed rather than the x5 in the snes version, nicer graphics and the ability to try out special moves in a brand new training mode. This game was the Megadrive’s first ever 24 meg cart and it really shows, the amount of love that capcom put into this game is amazing and even now over 20 years later it plays awesome. The only thing whic 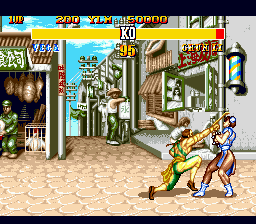 h stops me giving this game a perfect ten is the truly awful sound effects, the speech sounds like the girl from the exorcist! That aside an amazing slice of early 90s arcade bliss