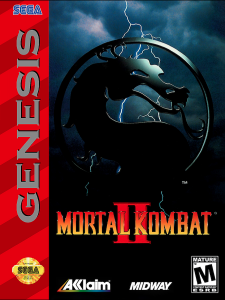 When Mortal Kombat 2 was released back in the autumn of 1994 it caused uproar in the press due to the sheer amount of
violence, blood and gore in the game. So much so that the United States Senate bought in emergency legislation to deal with violence in video games, this eventually lead to games receiving age rating in the same way that movies do.
The original Mortal Kombat was released the previous year and to be honest was a very average game with added gore  to “shock” people into buying it. The sequel however, improved upon the original in every way possible.
The gameplay was tighten up massively with extra moves and counter moves added to give the game more variety and substance. Graphically the game was massively improved with extra colours, 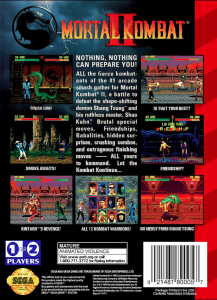 more detailed backgrounds and additional animations from the fighters. Speaking of the fighters there were many more added including unlockable characters for the first ever time (Reptile) and unlike the original game all the fighter feel different from each other with different basic moves and different Fatalities moves (where it is possible to do all manner of ghoulish things to an opponent including cutting them in half or turning into a dragon to literally bite their head off).
This game was also released for the Snes, but to be honest I prefer the Megadrive version as it plays faster and has a better control system, especially if you are using the 6 button pad. There were many more Mortal Kombat games released after this one (including a PS4/Xbox One version in 2015) but as far as many are concerned this game represented the high water mark of the series, a must buy
Nicole Moyer Review

Well the critics have spoken: Mortal Kombat 1 was a huge success and more Kombantants, blood, stages, and fatalities, this game of the franchise brought more of the staple characters that we see today:

Baraka: Personally responsible for attacking Liu Kang’s temple after his victory in the first game: is of the race Tarkatan (not in the Game Boy version)

Mileena: Twin/clone of Kitana: Cloned copy of Kitana to be loyal to Shao Kahn: she hides her Tarkatan features under her mask.

Kung Lao: Decendant of the original who was defeated in there 9th Tournament by Goro: also a relative of Liu Kang (Not in the Game Boy version)

Shang Tsung: After his failure in the last game, he begs his emperor for another chance and his youth restored.

Reptile: A Lizard who is loyal to his master Shang Tsung. He is the last of his species.

Jax: Major Jaxon Briggs hails from the same special ops as Sonya Blade: He is on a rescue mission to now save her.

Smoke: a ninja who shares all 3 ninjas moves, find him if you can.

Noob Saibot: The original Subzero: Scorpion finally got his revenge and now returns as a shadow of his formal self. Get 250 victories to play against him.

Kintaro: A Shokan warrior of Goro’s race: this mini boss is extremely tough and will stop at nothing to protect Shao Kahn (not available on Game Boy)

Shao Kahn: Emperor of Outword. A sadistic, immortal ruler hellbent on invading Earth to add it to his vast conquests.

Immediately after the victory of Earth in the previous tournament, Emperor Shao Kahn is displeased with his sorcerer’s results: Shao Kahn invades the realm anyway: starting with Liu Kang’s home the Temple of the Order of Light. Sonya and Kano are captured in the midst of the chaos. All bets are off as now Liu Kang, Johnny Cage and the rest of Earthrealm’s warriors are now to face a second tournament.

No matter who you play as or how the outcome you make, or the fatalities you choose, this is another excellent fighting game for the 1990’s. So download it today!