E.V.O Search for Eden for the SNES was published by Enix and released in 1992 (Japan) and 1993 (N. America).
The POWER is YOURS!Now for your SNES comes the new and exciting multi-change feature found only in our newest release, E.V.O.!
You can create almost any creature your imagination can conjure up.
How about some hideous freak of nature who looks suspiciously like your sister?
Who cares? With 12-megs full of adventure, you’ll have over 65 separate levels to perfect your creation skills.
With E.V.O., the power is yours!

coolest I had seen (At the time, Jurassic Park had just come out and dinosaurs were my thing).

E.V.O is a sidescrolling platformer that takes place over the span of a billion years. The game opens with an entity called Gaia telling you that she will guide you through the various eras of Earth’s evolutionary history. Your character begins as a fish, which you can customize using evolution points (akin to XP) that you gain by eating other creatures. With these points you are able to buy better defense, such as scales, armored plates, teeth, horns, etc.. Upon deafeating each era’s boss creatures, you then move onto the next geologic age. For example, upon completing the ocean era, you move on to the coasts of Pangea as an amphibian, then dinosaur, mammal and so on.
I was surprised how addicting this game is. It was a completely different style than any game I had previously played. In a way, it is similar to an RPG in that you are constantly 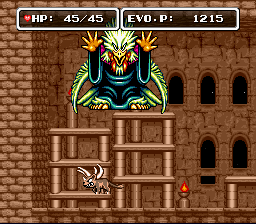 upgrading your equipment to better enhance your character. The soundtrack is catchy, the music reflects the feel of each environment pretty well. The character customization keeps the game from getting dull.  If you ever get a chance to play E.V.O Search for Eden, you’re in for a fun treat.