A Gothic Tale Straight from the Grave

Challenge the powers of darkness and untold magic as Sir Daniel Fortesque returns from the grave to battle an evil sorcerer’s plans of demise. (As if being dead wasn’t bad enough!) Follow the mystical trial of darkness and land in the journey of a lifetime.

– Fiendish puzzles and riddles to solve.

– Ghoulish enemies that will strike fear in the bravest of players.

When asked what are my top 5 games of all time I am constantly bumping titles off the list and bringing in a previous classic I have had the honor of playing. Medievil though has always had the guarantee of never being shifted from that list no matter how many times I chop and change. Its charm, humour and gameplay has always stuck with me through-out the years and even to this day I find myself going back to it to have another quick playthrough.

The story albeit a strange one but rather straight forward see’s you playing as sir Daniel Fortesque……. A knight who after dying from a stray arrow in a past battle has the chance to prove himself a hero by defeating the vengeful sorcerer Zarok when he returns to enslave the land of Gallowmere.

The enviroments range from the a dark creepy graveyard to a flying pirate ship in the sky, full of life and character with themed enemies which bring the settings more to life.

With a vast array of weapons you’d expect from a medievil time such as swords, bows and axe’s, to the more bizarre items such as Chicken drumsticks which only adds to the games likeability.

The voice acting of course isnt amazing as this was early days for the gaming era but the script is amicably performed and at times the quotes will bring a smile or giggle from myself.

The music score fits the moods perfectly especialy during the boss sections which in themselves do give quite a suspenseful feeling….. Just try the hilltop mausoleum boss and you will see exactly what im getting at. The Hall Of Heroes (A reward for collecting a chalice after slaying enough enemies.) is a joy to enter at the end of each level and meeting former heroes assisting Dan on his quest brings mystery.

Not knowing if the next reward is a weapon or rare item really does make you hope for a certain outcome as the games difficulty rises toward the 2nd third of the journey.

With the enemies becoming stronger the camera control becomes more important and this is where Medievil falls short but not by far.

The angles have a tendency to auto correct even if you manually move the camera which can be quite confusing and most of the time down right frustrating. mistiming a jump because the camera decided to move or having your route in front of you taken away as the camera prefers to look at your character centrally while you run toward it.

These gripes are more than forgivable though as the pros outweigh the cons magnificently with huge numbers. Medievil will always be in my top 5 games list and may very well be my number 1 game and be forever etched into my mind.

It will always be my guilty pleasure and I will always go back to it…… Saying that, I think I will play it right now. 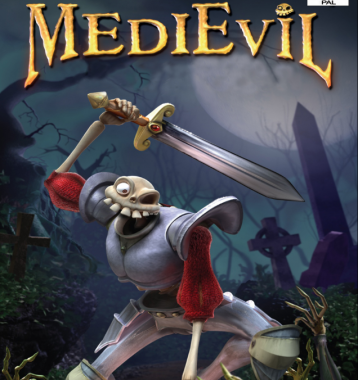