A story of times long gone by, tells us of the three-headed Morgul,
who lives a secluded life in his kingdom. This Morgul is the cause of
all the fears and nightmares of mankind. It is furthermore said, that
in ancient times he was banished to an unknown dimension by the hero
Devolon. Fear and sleepless nights disappeared out of the people’s
lives.

For some time now people have again been tormented by nightmares and
suffer from a serious state of dread and fear. Hardly anybody dares to
set a foot onto the streets at night and a dreadful fear that Morgul
has returned to his kingdom is alive in the people’s minds again. As
the only man on earth whose courage has not yet deserved him, you are
sent off, once again to free human kind from its burdon of fear. You
have been armed with the latest weapons and technical equipment for
this mission. Find Morgul in his kingdom, and destroy him for once and
for all.

In Turrican you will guide your hero through five different worlds, in
which he will be confronted by various perils. Three of these worlds
extend over three levels, the remaining two worlds over two levels.
Ever changing enemies, will constantly try to destroy you. You will
have to use your weapons skilfully in order to survive the varied
levels. To aid you in battle, you may gather up weapons and other
extras on your way, e.g. forceshields and extra lives.

Examine every level closely you will find new surprises and useful
items everywhere.

[This is referring to the invisible ‘bonus squares’ scattered around
which spew lots of goodies when jumped through (they’re always in the
air, I think). Go left and up from the starting position on the very
first level to find one, and a bonus life.]

For several years after its release, the Amiga suffered from more than a few sub-par game ports which failed to capitalize on the platform’s technical strengths. The Atari ST, while not as powerful as the Amiga, was out-selling its rival by a considerable factor, making Atari’s 16-bit offering the primary choice for most developers. The two computers also featured the same CPU, the Motorola 68000, and with most games appearing on the more popular ST first, developers often took the quicker (and cheaper) route of doing quick Amiga ports based on the existing ST version, without writing any code that would exploit the former’s superior graphics and audio hardware.

Full marks then to German software publisher Rainbow Arts and independent developer Factor 5 who saw the Amiga for what it was and were determined to showcase exactly what it could do in the right hands. On its release in 1990, Turrican stunned reviewers who fell over themselves to heap superlatives on the game, and with good cause. While Shadow of the Beast from Psygnosis was released the previous year and had wowed everyone with its graphics and audio, the gameplay left a lot to be desired. Turrican would suffer no such problems…

The game was orignially released for the Commodore 64 and remains a gaming high point for the 8bit wonder machine. Running at 50 frames per second and pushing the 64’s hardware to the limit, it was inevitable that 16-bit versions would follow. Factor 5 were determined to wring every last ounce of performance they could get from the more powerful 16-bit chipsets. 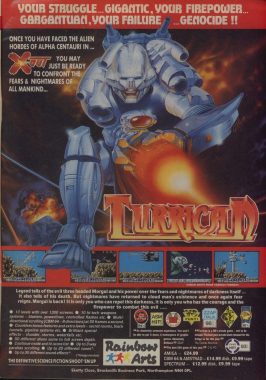 Turrican is a run-and-gun platform shoot-em-up, influenced by titles such as Nintendo’s Metroid. The player must defeat the three-headed Morgul, an evil entity banished eons ago to another dimension. Morgul has grown in strength and has begun to plague mankind from his inter-dimensional stronghold. Armed with the latest technology in the form of the Turrican suit, a highly armored, heavily weaponized exoskeleton, the player must enter the Morgul’s kingdom which extends over five distinct worlds. Each world is composed of multiple levels, swarming with enemies and defensive units, intent on taking the player out.

On starting the game, the player is equipped with a single shot weapon, which won’t see you very far. Fortunately, multiple weapons and power-ups are available throughout each level, some floating across the landscape, which can be collected by contact with the player and others contained in hidden power-up blocks which magically appear when hit with the player’s fire. Further shots

pumped into these blocks will cause other weapons and power-up icons to appear, which the player can then collect. There are two weapons available: multiple (a 3-way firing weapon) and lasers (handy for slicing through multiple enemies at a time).

Multiple is extremely efficient when traversing platforms out in the open,

though it’s not the beefiest of

weapons. Lasers offer much more penetration and are vital when confronting any of the larger enemies or guardians which populate the different worlds of Turrican.

As well as the standard gun weapons, the player can activate a lightning beam from their gun by holding down the fire button. This beam can be directed 360 degrees by rotating the fire button; it’s an awesome sight and a real life-saver when under attack from above or below.

The Turrican suit has an additional devastating card up its metal sleeve in the form of the power line. Pressing the space bar will emit two vertical lines, emanating from the player’s position, that sweep left and right across the screen, decimating (or severely damaging) any enemies in their path. Should the power beams come into contact with any scenery or structures, that part of the beam will be destroyed so it’s most effective when used out in the open. Even in more cramped surroundings, it’s still an indispensable tool for clearing your path of multiple bad guys. Be warned though, you only have a limited amount of these power lines (four to begin with) though more can be collected from the power up blocks found on each level.

Additionally, the player can also plant mines. By crouching down and holding the fire button for a second, an explosive device is planted that can take out or damage any enemies bearing down on you. You’re impervious to damage from your own mines so feel free to go hot-footing it over them if you need to beat a retreat from the opposite direction.

The final feature in the Turrican suit’s considerable arsenal is the gyroscope mode; holding down the fire button and pressing the space bar allows the player to transform into a spiked gyro. The player is impervious to all damage while in gyro mode, although you can still lose one of your lives by tumbling into an abyss. You can also fire your normal weapons and unleash power lines while in nongyro mode. While it might sound like a feature that will make the game too easy, gyro mode has its limitations. As mentioned, you still need to watch out for bottomless pits. It’s also impossible to traverse slopes or structures, or to remain in one spot since you’re constantly in motion, either rolling left or right. At best the gyro mode is good for getting out of tight spots or buying you a few precious seconds of invulnerability when the chips are down.

As we’ve said before, Turrican’s graphics are a marvel. This is a game that seriously pushes the Amiga’s hardware to the limit. There’s a staggering amount of detail throughout, both in the landscape and the various enemies that block your path, with countless visual flourishes that set a new bar for Amiga game graphics. The Turrican sprite itself is beautifully animated; if you look closely, a shadow falls on the player’s gun as you run adding a wonderful sense of depth. In fact the animation all round is a joy to behold. The still images in this review don’t do it justice; this is a game you need to see moving. The control of Turrican is pitch perfect too, with the player easily traversing the game’s many perilous ledges and platforms. Almost nowhere is out of reach which lends a huge sense of depth and immersion to each level.

Audio-wise, the game is no less than stunning. The Amiga’s sound chip is put through its paces, generating glorious, full-stereo effects for the game’s weapons and explosions,

And of course, no review of Turrican can be complete without mentioning the music of Chris Huelsbeck. It’s fair to say that Huelsbeck’s compositions for the game represent something of a watershed moment for Amiga games music. This was no collection of bleeps and identikit drum patterns gamers were listening to; Turrican features carefully and beautifully crafted melodies, with actual chord changes and multiple instruments used in each track. Small wonder that in recent years, the music from the Turrican soundtrack and its sequels have featured in the Symphonic Games Music Concerts, a testament to the enduring legacy of one of the all-time great computer game soundtracks. 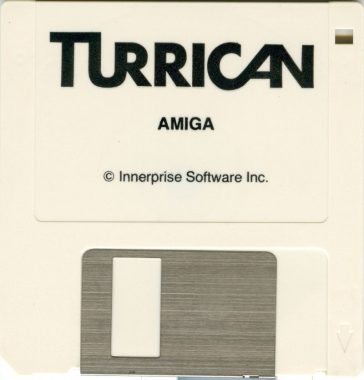 Turrican represented a major leap forward for Amiga games, in particular how developers approached the platform when porting existing titles. While there are numerous examples of previous releases which would showcase the machine’s technical power, few of them match Turrican’s level of graphical/audio achievements and its immense playability. Above all else, Turrican is just so much fun to play, an element sadly lacking from many Amiga shooters both before and after. It’s this perfect combination of technical excellence and playability that floored reviewers and punters alike in 1990 and which set the bar very high for all subsequent shoot-‘em-ups on the Amiga. Impressive though Turrican was however, it would eventually be out-classed in almost every department by its own sequel, Turrican 2, which would appear in 1991. Check back soon for our review of a game which, in our humble opinion, represents the pinnacle of Amiga gaming. 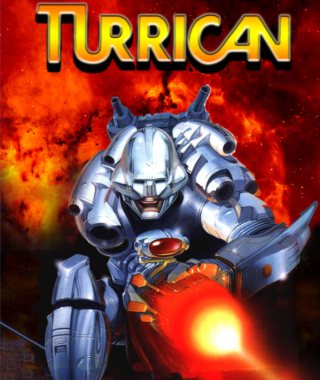