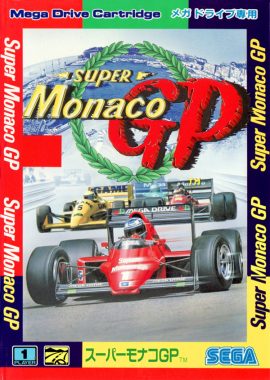 Sega’s original Monaco GP (1979) was one of the first arcade games I ever saw. I distinctly remember the headlight effect used as you went through the tunnel; only a cone-shaped area of the track directly in front of the car was visible on an otherwise black screen (headlights in an F1 race? Can you imagine). Don’t bother looking for Monaco GP in MAME because it isn’t there. Like many other early arcade games (such as Pong) it was built with discrete logic and analogue circuitry; no CPU to emulate. This game eventually spawned an arcade sequel – Super Monaco GP – a whole 10 years later.

The original coin-op ran on Sega’s X Board (same hardware as After Burner) and made extensive use of its scaling and rotation capabilities. As revolutionary as the Megadrive was for a home console, these graphical wonders weren’t part of its design and consequently, this conversion doesn’t have quite so much going on. There are fewer trackside objects and the 3D effects are less in-your-face, however the Megadrive port still ran rings around the home computer conversions of the same game and the addition of a career mode made it one of the must-have cartridges of its time. 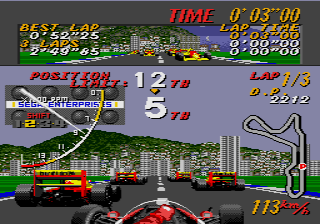 There are two modes of play: Super Monaco GP (arcade mode) and World Championship (career mode). In Super Monaco GP mode, you do one qualifying lap and then a three-lap race around the Monaco circuit. If you crash or drop below a progressively tight “position limit”, it’s game over. If you finish high enough up the field, there’s another three-lap race in wet conditions and that’s it. Experienced players can finish the game in under 10 minutes and without the coin-op’s immersive 3D, analogue steering wheel and pedals there isn’t much game here at all. Fortunately Sega were conscious of this and expanded the Megadrive version enormously.

There is a choice of automatic, 4-speed manual or 7-speed manual gear shift. This affects the difficultly of the game in a slightly odd way; automatic gear shift makes it easier to get around the circuit in one piece, but the game compensates for this by limiting the player’s car’s acceleration and top speed. You can easily win more races by selecting one of the manual modes. If you put a wheel on the grass, your car will slow down and if you clip one of the trackside objects it will stop you dead. Hit something at speed and you’ll lose a wheel, ending your race. Damage accumulates when you hit the scenery and other cars, leaving you with reduced acceleration and top speed until you can make a pit stop. Your tyres also wear down throughout the race and you have compensate for the loss of grip or risk crashing out. 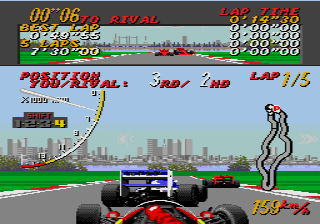 In World Championship mode, you play an entire Formula 1 season across 16 well-known (circa 1989) tracks. The teams and drivers are legally distinct from a late 1980s F1 roster, for example there are teams named “Madonna” (McLaren), “Millions” (Williams) and “Tyrant” (Tyrrell) with drivers bearing some resemblance to Nigel Mansell, Alain Prost and others. You begin the season driving for an up-and-coming team and once you’ve determined your position on the starting grid for the first race, you get to name another driver as your rival. Here is where the game takes a unique turn; if you finish ahead of your rival in two consecutive races, you will displace them from their team and continue the season with their car. You can do this multiple times in one season, working your way up towards the top teams to increase your chance of winning the championship. This works both ways and if you mess up two consecutive races, you’ll be fired. Let’s hope one of the teams at the back end of the grid will give you a drive because otherwise it’s game over. This car swapping element creates real depth to the game, but this never really happened in Formula 1 for real. Perhaps the FIA should have a look at something similar in their never-ending quest to make F1 interesting again.

If you do win the championship, you’ll need to successfully defend your title to complete the game. This isn’t as easy as it sounds, because the game introduces a new driver (obvious Ayrton Senna look-alike) who will inevitably beat you in the first two races because the game is rigged for him to do so. Having robbed you of your position at the top team, dropped you down to the midfield and labeled you a has-been, it’s only natural to hate this guy and dish out some much-needed attitude adjustment.

There is a short exchange of words with your rival before the start of each race and your pit crew give you a quick pep talk before and after. However the Japanese to English translation isn’t the best, for example “Try not to soup up your engine too much” – er, what?

Lewis Hamilton was just six years old when this game came out. Let’s let that sink in for a moment… It is a pseudo-3D arcade racing game similar to Super Hang On, not a simulation but a lot more like the real thing than games such as Super Sprint. Unlike polygon-based F1 games such as Virtua Racing it is not possible to spin the car or cut corners; the track simply bends around the car and you steer to keep it on the tarmac. Even though the frame rate is fairly low (around 20 FPS) the impression of speed is generally good and there’s plenty of wheel-to-wheel racing action to be had. 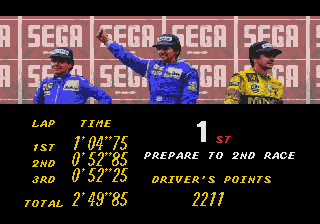 Some circuits are trickier than others and you have to use every inch of kerb to be in with a chance of winning, especially when you’re in one of the less powerful cars. You can even sit close behind the car in front and use their slipstream to overtake, plus the game is open to a fair bit of abuse. You can deliberately shunt your rival on the starting grid, sending him to the back of the field or even drive into the flag man at the end of the race just for fun. As nonsensical as the dialogue is at times, you do get a sense of drama unfolding as the season progresses. You can play a tactical game, for example it is possible to win some races with the default car and I like to challenge the championship leader, dropping him down the grid for the remainder of the season. Good luck scoring many more points with that heap of sh*t…

Even though every car has its own livery when you view them, a single design / colour is applied to every car for the actual race and only your rival’s car appears in its own colours. This may be because of the Megadrive’s limited to 64 on-screen colour palette, but it could also have something to do with the hardware sprite limit and the programmers had to do some multiplexing. There is some noticeable flickering when there are lots of cars in view but the game does not slow down at all. 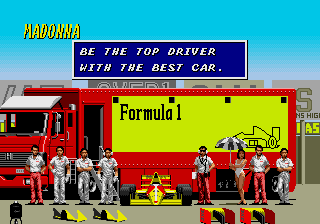 While the game’s physics and visuals seem quite basic by today’s standards, back in 1990 we didn’t often see a racing game this good outside of the arcades. It still plays very well after all these years though, in fact it is one of the few games I go back to every so often and will play for hours. I don’t think I will ever got bored of playing Super Monaco GP as it can still get my blood pumping after 25 years. While the Senna-endorsed sequel is arguably a better game, I prefer the first one myself. The original’s rock / guitar style soundtrack is better for a start (seriously, some of the tunes in Super Monaco GP II sound like someone gargling with sand) and in my opinion the first game is more challenging.

It is such a shame that this game didn’t get proper Mega-CD or 32X overhaul; the version that appeared on the 5-in-1 disc didn’t take advantage of the extra hardware. More colours, faster frame rate and tracks rendered more like the arcade version would have made a magnificent game and the Mega-CD could have made that possible. But you can’t have everything; it is what it is and Super Monaco GP is still an absolute classic.