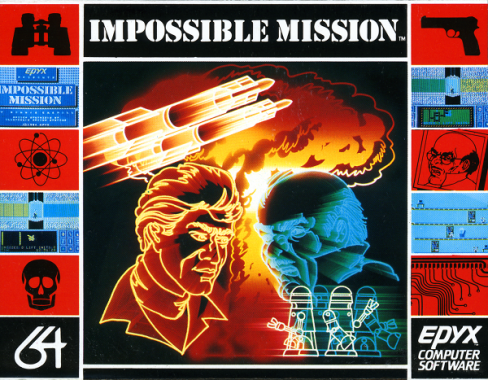 When we first got our Commodore 64 back in 1986 I knew we’d chosen well, if the size of the rack of games for the system in Boots was anything to go by. I got to know a few of the other kids at school who also had 64s, one of whom invited me to his house one afternoon and showed me Rambo, Action Biker and the dauntingly titled Impossible Mission. “It talks.” he said. “It goes ‘Stay a while… STAY FOR-E-E-E-VER!’ like that.”

“Yeah right.” I thought. “There’s NO WAY you’d get speech like that in a computer game”. What I saw next practically blew my nine-year-old mind. Who knew that a computer was capable of this? The speech was real, the graphics and animation were stunning and the freedom of movement was unlike anything I’d seen before. What’s more, the game was already more than two years old by this point! Impossible Mission was simply a masterpiece, one of the finest 8-bit computer games ever made. 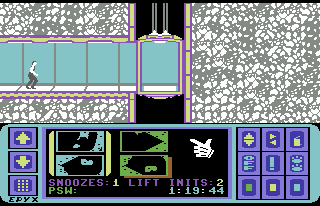 The player controls Agent 4125, sent to infiltrate the underground lair of archetypal mad scientist Elvin Atombender and stop him launching nuclear missiles in a bid to start World War III. Just like my mate said, a digitised voice taunts you as the game begins and you are placed in an elevator at the entrance to Elvin’s hideout. You have just six hours to explore each of the 32 rooms to find the discarded fragments of punch card, which you must piece together with the aid of your pocket computer. This is the only way you can decipher the access code for Elvin’s control room and apprehend this genocidal nutjob before it’s too late.

The punch cards are scattered throughout the complex, hidden in various pieces of equipment and furniture from lamp stands to cigarette machines. Almost all of the rooms are patrolled by sentry robots whose movements and speed vary from one to another (some are armed with lasers while others will simply charge at you). If you come in contact with a robot or its laser beam, you will be disintegrated. In some of the rooms you also have to watch out for a sinister floating orb, much like Rover from the TV series The Prisoner.

There are narrow platforms to negotiate, requiring expert timing and positioning to avoid falling to your death. Each time you are “killed” (and this happens a lot), you lose 10 minutes and once the six hours have elapsed Elvin laughs at you and the game is over. You will find passwords along the way that can be entered at one of the computer terminals, putting all of the robots in that room to sleep for a short time or resetting all of the lift platforms. These are essential and can also be earned in one of the two code rooms, where the agent has to play back a sequence of random musical notes in ascending order of pitch. 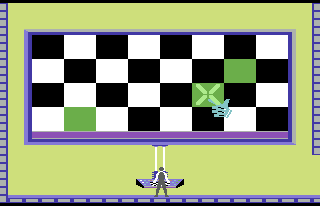 Basic controls are run left, run right and somersault. Agent 4125 is a nimble chap and much of the game is spent giving the sentry robots the run-around. You move from room to room via a network of corridors and lift shafts, where you can also take a moment to use your pocket computer. It can browse, sort, overlay, copy, flip, colour-code and delete puzzle pieces using the joystick-controlled pointer not unlike a modern day smartphone app; there is even an undo button! The computer also has a modem, so it can connect back to base to check if you have all four the pieces of a single puzzle and it can also turn pieces around the correct way. Each call will cost you two minutes.

The game is rock hard and six hours isn’t a lot of time when you keep getting zapped by robots and falling down holes. You need to find all 36 puzzle pieces, crack the code and get to the control room, so you need to manage your time very carefully. Could this really be an impossible mission? Well, I can tell you it isn’t because I’ve finished it without using any cheats, but it did take me 30 years! 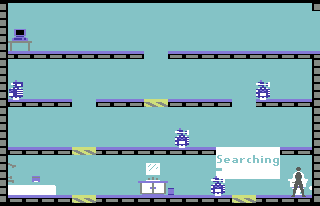 Here was a game that was so far ahead of its time, it got re-reviewed in Zzap!64 magazine several years after its original release for the benefit of anyone who hadn’t seen it. To have played this at the time of its release must have been an experience; back then most of us were playing the abysmal version of Pac Man on the Atari 2600, thinking it was the height of home entertainment.

After being wowed by the “Another visitor…” speech, I remember running and jumping aimlessly around the corridors just to admire the main sprite’s animation. We hadn’t seen such a graphical leap since Pitfall and probably didn’t see it again until Flashback in 1993. Indeed, Flashback was a very similar game to Impossible Mission and could have drawn some inspiration from it.

The speech was generated by a third-party company called Electronic Speech Systems. The technology used to compress such large pieces of dialogue into a few kilobytes of RAM (also used in other games such as Ghostbusters, Desert Fox and Beach Head II) remains a secret to this day. 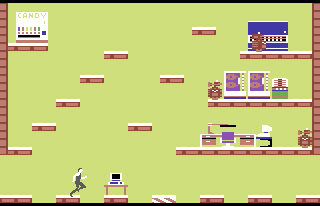 The collision detection is pixel-accurate; a factor that was worked into the gameplay to some degree. Many of the jumps are so tight you need to take a leap of faith i.e. stepping almost off the end of a platform before hitting the fire button to jump. Similarly, some robots can only be jumped from a certain distance because the position of the agent’s legs during a somersault makes a difference. This can be frustrating, as can running backwards and forwards behind a robot in order to search a piece of furniture a fraction of a second at a time, but the game is very enjoyable nonetheless.

The code rooms aren’t much fun, but you don’t have to spend a lot of time in there to finish the game. The jigsaw puzzle element can be head-scratcher but it contrasts very well against all the running and jumping. The feeling of progress is very satisfying when you assemble a complete punch card and gets progressively easier as you’re left with fewer pieces. Using the pocket computer is a game within a game; in fact I’m fairly sure this is the first point-and-click interface of any kind I used on a computer. 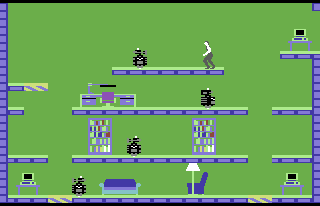 I was really fascinated by Impossible Mission when I first saw it and still enjoy playing it and talking about it three decades later. The attention to detail is remarkable, from the dial tone / modem handshake coming from the pocket computer to the buttons on the vending machines. Dennis Caswell must have used every trick in the book to cram this much game into in a single load. When you consider that it was made in the early days of the 8-bit era, it really is a staggering achievement. There are no known bugs in the original version either. Some might argue that the Sega Master System version is the best overall, but that wasn’t released until 1990.

The game spawned two sequels: Impossible Mission II (1988) was an expanded but not-ever-so-interesting update of the original game and Impossible Mission 2025 (1993) on the Amiga, which frankly didn’t have much going for it. It did include a version of the original game on the disk though, so it did make it to the Amiga in the end albeit a direct port of the C64 version.

Epyx made some outstanding games in the mid 1980s, but none more significant than this. With games of this quality, no wonder the Commodore 64 went on to sell 12.5 million units. Had Commodore done a deal with Epyx to make it a pack-in game, they might have shifted a few million more as it really did show what the hardware was capable of. This was the one to show to your Spectrum-owning friends! Stay forever you say? I might end up doing just that.