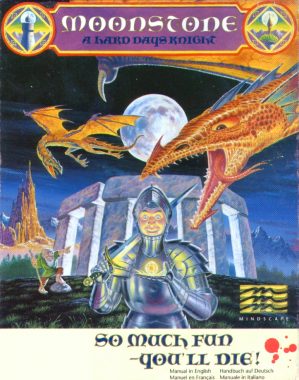 Knights, dragons and druids you say? Sounds like a good old-fashioned medieval fantasy adventure game. Fun for all the family, right? In 1991, before the days of Mortal Kombat video games weren’t particularly bloodthirsty. This was partly due to Nintendo’s aversion to any form of violence in their games and the rise of Sonic, Mario and the many similarly cartoonish franchises that followed. Unlike consoles, games made for home computers didn’t have their content restricted by the hardware vendor so the programmers had a lot more freedom and the occasional game turned out noticeably more risqué. Moonstone on the Amiga is nothing short of a bloodbath; there is more blood, guts, screaming and death than you’d find in your average slasher movie. Whether it’s slaughtering scores of mutant hedgehogs with a claymore or a Monty Python-esque fight to the death with one of the Black Knights (yes, that’s what they’re called in the game), you really wouldn’t have wanted your mum to see you playing it back in the day. You can turn the gore off before you start the game of course; why not crack open an alcohol-free beer while you’re at it if that’s how you roll? Thought not…

After a high-quality animated intro we hear the incredibly eerie background theme for the first time, composed by the legendary Richard Joseph (sadly no longer with us). There are four knights to choose from, all identical apart from their colour and starting position on the game’s map. You can rename them at this point if you wish; as kids we would snigger to ourselves as we set off on our quest under a typically childish name. What? We all did it! 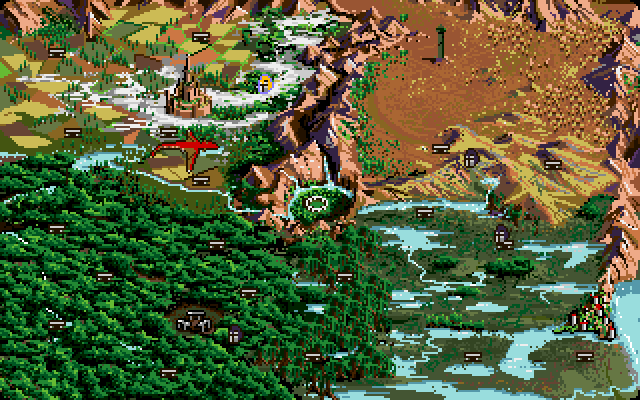 The game begins on the map screen, which is split into four territories with the Valley of the Gods in the centre. Each of the players’ knights will begin in their home territory; if there are fewer than four players the remaining knights are replaced by NPCs (the aforementioned Black Knights). Dotted around the map are numerous lairs, each guarded by a pack of nightmarishly hideous creatures. Once inside, you have one task: KILL EVERYTHING. You may have to face wave after wave of axe wielding rat-faced goons, avoid being gored by rampaging horned lions or be smashed into a paste by an 11-foot tall blue ogre. Whoever or whatever you might be up against, you have to keep moving and stab / slash / chop ’em good. This is one game that can really get your heart racing, as the playfield becomes littered with blood and the mutilated remains of the dead and the attackers keep on coming. In short, if it moves, kill it. Defender of the Crown this ain’t. 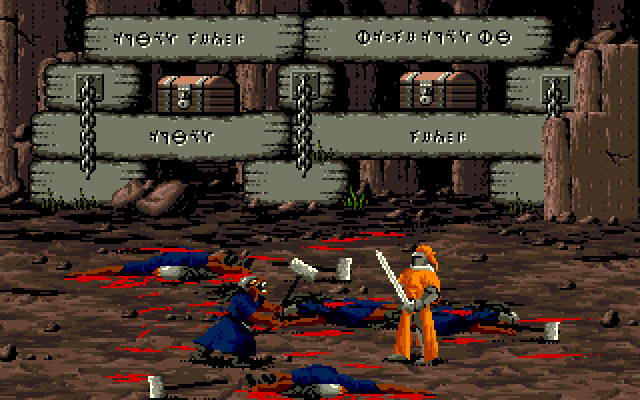 If you emerge victorious from the carnage, the beasts’ precious treasure trove is yours to plunder. You might find extra weapons, healing potions, gold pieces (with which to buy weaponry or gamble), magic scrolls or one of the keys required to enter the Valley of the Gods. You also gain experience points (XP) when you conquer a lair and can boost your strength, stamina or endurance with these but the game gets harder as you grow stronger. Between turns, a huge red dragon swoops across the map screen on the lookout for some lunch. If he picks on your knight and you’re early on in the game, chances are you only have the basic sword and boy are you in the sh*t… 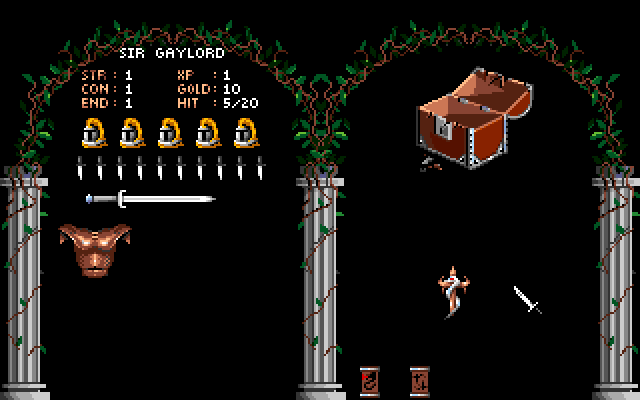 Moonstone is turn-based and each player / the computer can move their knight / NPC across the map by a set distance each day. If two player-controlled Knights meet, they must fight each other in a simultaneous two-player duel. Killing another knight, including the Black Knights, allows you to steal one item from their inventory. To add insult to injury (and by insult I mean additional, horrific injury), as a defeated knight falls to the ground you have the option to lop his head off with your sword for good measure. Alright, we’ll call it a draw… 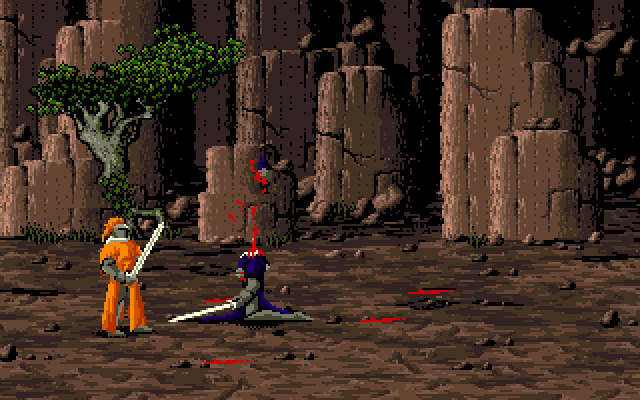 Once you’ve recovered all the keys you can enter the Valley of the Gods to fight the final boss for the eponymous Moonstone. The magic scrolls can come in useful along the way; these can grant extra travel distance across the map and protect against attacks by the dragon amongst other things. However, some of the scrolls are cursed and have a negative effect instead. If you’re struggling for cash or magic items you can visit Math the Wizard in his tower, who may or may not be giving out freebies. 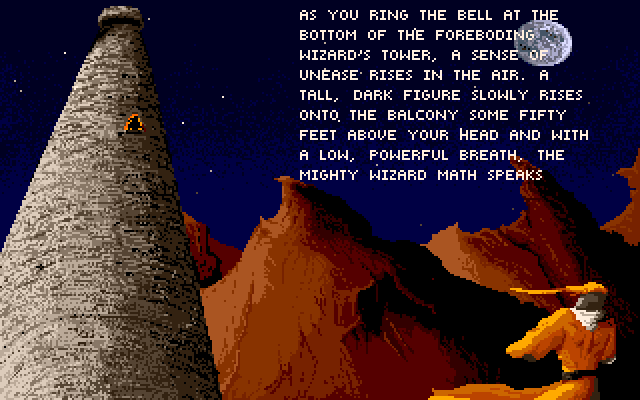 Whichever path you take around the map, you’ll probably need to visit one or both of the two cities in the game along the way. Here you can visit the merchant, tavern, healer or high temple to spend all the gold you’ve stolen. Regardless of the financial benefits, you may find yourself killing anything that dares come within an inch of your character because it really is the only way to survive in this game.

Moonstone is a rather creepy adventure game with beat-’em-up elements, beautifully presented with bucketloads of atmosphere and it is thoroughly enjoyable to play. The game is notorious for its level of violence although it is used to humorous effect throughout, reminiscent of Barbarian on the Commodore 64 with swords clashing and the occasional head flying off the screen. There would have been no place for anything like this much gore on home consoles at that time (although I do remember The Immortal on the Megadrive having similarly gross sequences with exploding heads and such). 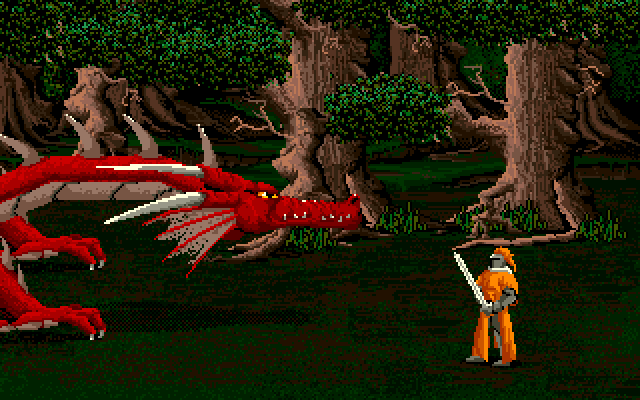 Although the characters’ movements are not particularly smooth, the world within the game is wonderfully drawn and animated. The design of the monsters is imaginative, actually quite scary at times (watch out for the mud monsters!) and some are absolutely huge. The dragon looks spectacular on-screen when you face him; the sheer size of him makes you think “I’m dead” and run like hell before he even opens his mouth. Moonstone’s blend of frantic battle sequences and strategy elements really drew me in when it was first released and kept me coming back to it again and again over the following years. The keys and power-up items you’re searching for are placed in random locations on the map at the start of each game, so you never play through the same game twice. 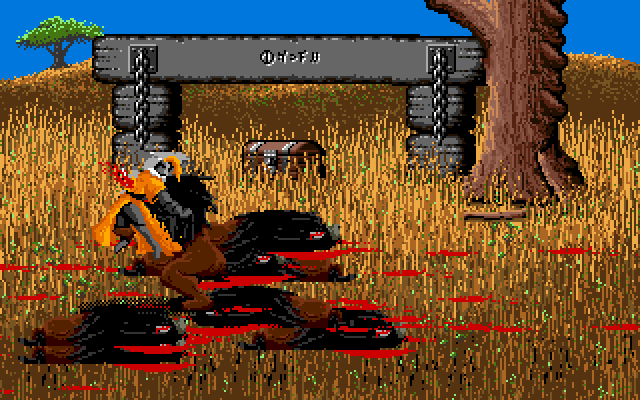 The original release of Moonstone for the Amiga is considered a rare collector’s item, possibly because the game was banned in some countries resulting in fewer copies in circulation. Boxed copies complete with printed map are highly sought after, often changing hands for hundreds of pounds. Rightly so; it’s not often that a really rare game is also a really good game.

There are a fair few bugs, for example when you defeat one of the black knights he may appear to have the Moonstone itself in his inventory and taking it will result in Guru Meditation. Despite such glitches, Moonstone is a classic and one of my absolute favourites on the Amiga. You needed two floppy drives to enjoy it without constant disk swapping though. The PC version was almost identical but it only had basic sound card support, so it lacked much of the Amiga version’s atmosphere. So grab the game if you can find it, don’t be put off by the initial difficulty and take yourself on an afternoon killing spree. Good luck Sir Douchebag, your quest awaits!