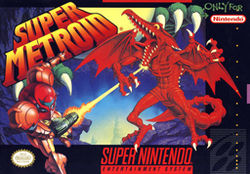 Super Metroid made it’s appearance for the Super Nintendo in 1994. This action adventure game picks up where it’s predecessor “Metroid” for the NES left off.
Our heroine, Samus Aran delivers the metroid to a research station to be observed by the scientists there. Pretty much the SECOND Samus departs the station, a distress signal beckons her back. Upon returning Samus discovers the place has been wrecked, metroid missing, scientists dead. She enters a door and finds the metroid in the clutches of the space pirate Ridley. A short battle ensues and Ridley takes off with the little metroid. Samus follows Ridley to the Planet Zebes, a familiar place to original Metroid players. 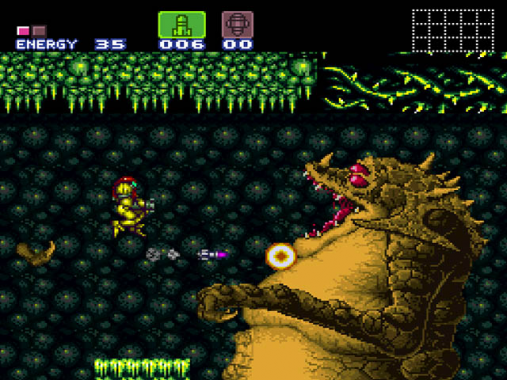 Players of the original Metroid are rewarded with a new view of Zebes.  The same mysterious planet is now in 16 bit, with atmospheric music and even more background details. Most of the same creatures are encountered, along with some of the same bosses. Some bosses such as Kraid (who was small in the original) are now of garganutal proportions.  There are so many small details in this game that are a real treat. For example: the boss statue. In Crateria, one of the sub levels of Zebes, there is a room with a large golden statue depicting each boss Samus will encounter in the game. After each is boss is defeated, it’s statue counterpart turns gray. The first time I stumbled into that room I thought I was in trouble, but it’s just a statue thank goodness!
Getting all of the items such as energy tanks, missiles and weapons upgrades require some real thinking on the players part. Leave no stone unturned. There are so many nooks and crannies in this place that each time I play, I discover a new location or missile pack I’d overlooked before. Use your bombs, use them often, you never know which walls may harbor a secret entrance to a needed item.
This game is atmospheric. The player is totally immersed in this world. The music perfectly compliments Zebes and it’s various environments. I actually spent the past two days before writing this revisiting Super Metroid. I realize one of the reasons I love it is because it is such a solitary game. Unlike RPG’s (which are my usual go-to games) Samus does not interact with any NPC’s, no taking on quests from anyone, no having to visit shops for upgrades. Just me and Planet Zebes. 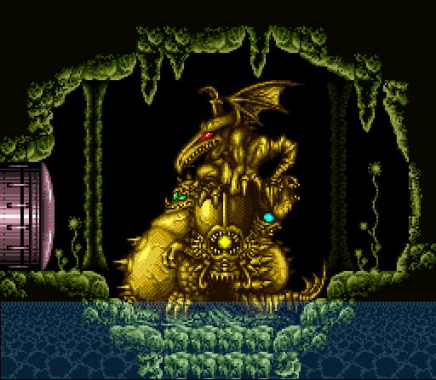 I would like to mention that this as well as the original Metroid were heavily influenced by the “Alien” series of movies. The villains name is Ridley (hat tilt to Ridley Scott). The developers chose a female protagonist as homage to Ripley’s character. Even the monster design is influenced by H.R. Giger, the renowned artist who designed the movie aliens. I really cannot praise this game enough. This remains my favorite Metroid game in the series. I have played some of the later ones, and ehh.. nothing will top this one in my eyes.