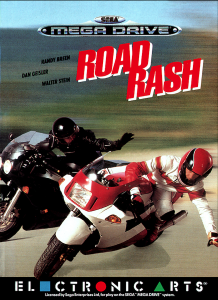 Released in 1991 for the Sega Megadrive Road Rash is a classic motorcycle racing game with the added twist of combat!

This game has much to enjoy, firstly the graphics for the time are superb with massive sprites and vehicles and very colourful tracks and backgrounds with massive amounts of detail. The soundtrack is also incredible, I would say the best music on the system aside from Streets of Rage 2.

Gameplay is sublime, very arcadey style handling (which I love), very intelligent cpu opponents, interesting tracks to race on and an almost perfect difficulty curve. What really sets the game apart from its peers though is the added bonus of combat. When you 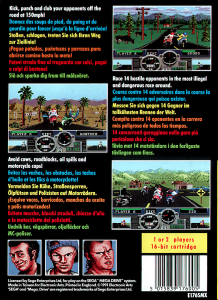 are close to a rival racer you can punch and kick them which often results in them falling off their bike, it is also possible to grab weapons from a rival and proceed to beat him with it (although often I am the victim here).You also need to worry about oncoming traffic and worse of all cops on bikes!

Overall I would say this is the best racing game on the Megadrive and is a must buy for any fans of the genre, as a side note the actual cartridge is very unique as it is much larger than most other Megadrive cartridges with a massive yellow slab on it! Later games from Electronic Arts would all share this design but Road Rash was the first game I remember to have this.