Draw your sword and prepare to defend your honour against the world’s supreme 11 Samurai warriors. Clash with an opponent in 2 player versus mode or enter the ultimate showdown in arcade mode, packed with special power moves and interactive scenery.

Back in the early to mid 1990’s I was desperate to get my hands on a Neo Geo console so I could play awesome games such as Samurai Showdown and Fatal Fury. 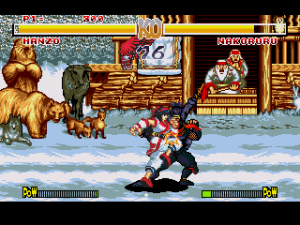 Sadly due to the huge cost of the console and games ( over £500 for the machine and over £150 for each game) it never happened. The closest I got was this conversion of Samurai Showdown for the humble Sega Megadrive.
Taken in context this is a decent game with nice colourful graphics, each fighter has a weapon (quite original for the time) and best of all the gameplay was very different to the norm. At the time every other one on one beat em up was either a Street Fighter or Mortal Kombat clone but here the gameplay is much slower and more deliberate (almost like a boxing game).
Where this game falls apart is in the comparison department. When I finally played the Neo Geo version years later at a friends house the difference was night and day. Graphics and sound are hugely improved on the Neo Geo with amazing 3d rotation effects which the poor Megadrive cannot possibly mimic. There are also many more gameplay modes and options available on the Neo Geo edition. 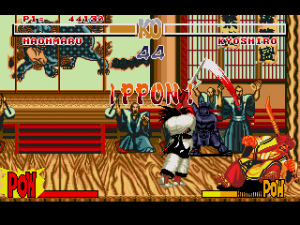 Despite this if the Megadrive version is your only option and you have an interest in beat em ups then this game is well worth picking up.