Help Croc, the crusading crocodile, rescue his peace-loving Gobbo Island friends from the grasp of the evil magician Baron Dante. Five different 3D worlds to explore, including volcanoes, forests, ice glaciers and underwater caves, each with its own unique elements, terrifying monsters and mind-boggling obstacles.

Croc: Legend of the Gobbos was released in late 1997 for the Sony Playstation, a delightful 3d platformer with more than a 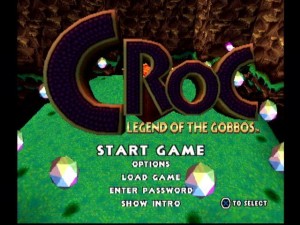 passing resemblance to Super Mario 64.
The main character Croc is one of the most cute and huggable lead characters I have ever seen (especially when he kills a baddie with a swish of his tail whilst shouting “Kersplat!”).
This was one of the first 3d roaming platforms released on the original Playstation and also one of the first games to support the Dualshock controller with Analogue controls. The actual gameplay is nice enough with plenty of different worlds to explore including snow levels, lava levels, dungeon levels and desert levels. 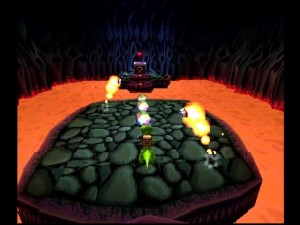 The only negative with this game is how easy it is, sadly most gamers will get through it in a few hours or less but while it lasts this game is a real delight to play. I would recommend this game to any platform game fans out there, I believe this game is also available on the Sega Saturn too.