Skip to content
You are here
Published by
SEGA of America, Inc.
Developed by
Novotrade Software Kft.
Released
1994
Platform
Genesis 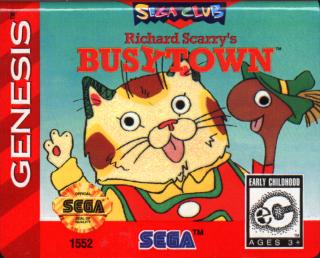 Richard Scarry’s Busytown is a Mega Drive game that released in North America in 1994.

Richard Scarry’s Busy Town is a game I picked up not knowing what to expect at all! With a tagline of ‘The Most Fun Game Ever’ I had to give it a try!

What I found was generally one of the worst video games I have ever played. (YES! Even worse than Barney).
It was a really colourful Interactive Story Book game and was absolutely horrible to control. I later found out this was originally a DOS game and could be used with a mouse. The voice acting was absolutely one of the worst I have ever heard and trust me, I’ve played some terrible games.

The stages were very repetitive and honestly most of the them didn’t really even have a point. One of the stages did have me in stitches though, and that was where you had to control A GUST OF WIND, to cause havoc in Busy Town.
Between the unimaginative stages and horrible voice acting, the soundtrack eventually made me want to throw the game out of the window.
I normally would put it down to the fact this game is aged at younger players with problem solving and bright colours, but I have played other games aimed at a younger audience and enjoyed them thoroughly. (Yes, im talking about Barney again)
If you make any mistakes while problem solving a character will make you look stupid. ‘Are you blind?’ was one I got told when i overfilled a glass of milk.
Also, there is no end to the activities, and no overall goal, so If you want to play a game and feel like you’ve actually finished it, Don’t play this 🙂
All in all, this game is horrible and I advice everyone to give a try just to experience the mess.