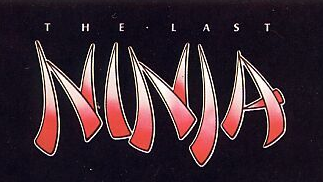 The Last Ninja is a seminal action adventure game for the Commodore 64, released in 1987. It is set on the fictional island of Lin Fen in the Yellow Sea. The evil Shogun Kunitoki has all but destroyed the Ninjutsu and is set to acquire their knowledge and powers, the key to which is held within the ancient and sacred Koga scrolls. Believing there are no ninjas left alive to threaten him, Kunitoki is set to become all-powerful but little does he know there is one other. Armakuni (the eponymous Last Ninja) must cross the island over six levels in order to find and defeat Kunitoki himself. Only then can he recover the scrolls and return them to their rightful place. Armakuni has no weapons to begin with and the Shogun’s henchmen are everywhere, plus there are some difficult landscapes to negotiate and a few traps along the way.

Anyone who read Zzap! 64 back then probably remembers the two-page “coming soon” spread System 3 took out;  those eyes starting out at you from the magazine! There were a few tantalising yet slightly blurry screenshots arranged in a film strip, bearing the overused caption “actual C64 screens” but it certainly got our attention. With Zzap! issue 26 came the inaugural cover tape, featuring a looping, non-playable demo of the Palace level. For me, it was the first time I’d seen a preview of a not-yet-released game of any kind and it was exciting stuff. It was clear that System 3 were setting a new standard here; I couldn’t get over the detail in the scenery with the little bonsai trees and suits of armour on display. The Last Ninja was shaping up to be something rather special. 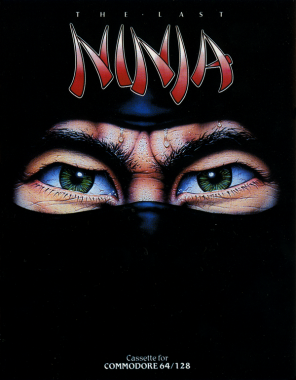 The game is a flick-screen adventure with beat-’em-up elements. Each level is spread over a series of interconnecting isometric screens and the player can move freely around the map. On most screens, you find your path blocked by one of the Shogun’s henchmen who will attack you on sight. Their speed and weaponry varies from one screen to another, but they are not change between games.

The Wastelands
This is a big first level. You’d better find a weapon quickly because taking on those henchmen unarmed is not easy, even for a ninja. There are a couple of objects that are needed later in the game, so don’t leave anything behind. You’ll need to find a way past the dragon’s cave before you can exit the level. Having stolen a set ofnunchaku from a dead guy, your ninja really means business. 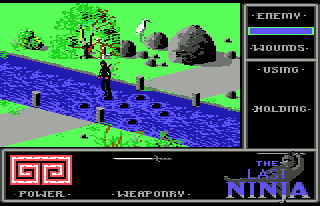 The Wilderness
Things start to get a little tougher here. You need to watch your step along the cliffs and try not to lose too many lives crossing the river and the swamp. You’ll be against the clock in the latter half of the level too, so don’t waste too much time hanging around listening to the awesome music. Oh, and don’t forget about finding yourself a staff.

The Palace Gardens
This is a beautiful level with wonderfully chilled-out background music. Back in 1987 we genuinely took time to stop and admire the scenery; we had never seen this much eye candy in a video game before. It’s not a difficult level but it is fairly long. There are extra shurikens here too, but you should hang on to these until the later levels. 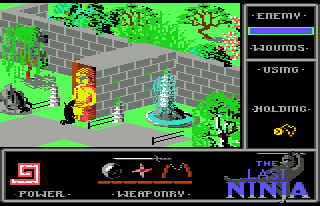 The Dungeon
A stark contrast to the previous level. The fourth level is a dark labyrinth of confusingly similar-looking paths, with torture devices and body parts strewn around the place. It is easy to lose your bearings in here and find yourself wandering around for ages. There are skeletons armed with swords a la Jason and the Argonauts (this was a couple of years before Golden Axe) and a giant spider as well as the usual henchmen. Ghosts wander around the deserted corridors but just as your mum used to say, they cannot harm you. The music on this level is incredibly eerie and adds a ton of atmosphere; it still freaks me out a little. 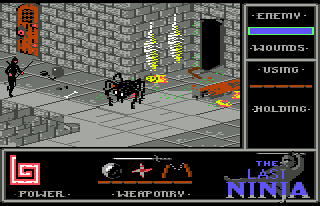 The Palace
It sure feels good to get out of that dungeon! Once inside the palace you have to search the rooms and find the staircase that leads to the Inner Sanctum. Defeated henchmen also respawn, so you will probably have to fight a couple of them more than once. The map is quite small but there is more combat involved and a fair few traps to look out for. Getting out involves painting yourself green for some reason. 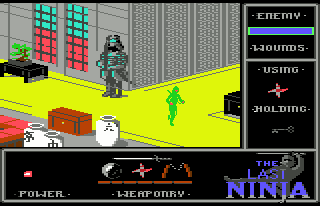 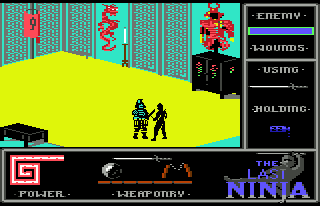 The Inner Sanctum
Kunitoki’s hiding place is hidden deep within the palace, guarded by a cougar of all things. It is a fairly short level but you will need to make sure you brought at least a couple of lives for the final battle. Kunitoki himself isn’t that difficult to beat in a straight sword fight and since you’ve got the skills to have made it this far, he should be dead in no time. That’s for murdering all those ninjas; if only he’d suffered more…

Basic attack moves are limited to punch and kick, but there are five different weapons to find and four of them are on the first level. Once you’ve armed yourself with a sword, nunchaku or staff, you can strike at your opponent’s head, stomach or torso depending on how close you are. There are also shuriken stars (great fun!) and smoke bombs that can be thrown from a distance to take out an opponent in one hit. It is possible to avoid a battle altogether by sneaking past an opponent and making a run for it, at which point he may commit harakiri (bit harsh, it’s not his fault you’re so awesome).

Those henchmen aren’t your only obstacle. There are streams and swamps to cross, fire-breathing dragons and all manner of booby traps. Streams and swamps require carefully timed jumps across the stepping stones or flotsam respectively. You begin the game with three lives but you can earn an extra life on each of the first five levels by finding and collecting an apple. When you finish a level, the number of lives you have left are carried to the next so if you move to the next level with only one life, you will keep restarting that level with one life each time you die. The only way around this is to do a hard reset and reload the game. You must also make sure you collect all of the items on each level before exiting, for example if you don’t pick up the key on the first level, you won’t be able to enter the palace on the fifth level! 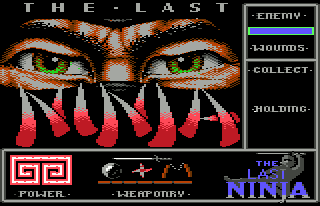 As soon as the game was released, I went straight out and bought it on the strength of the Zzap! demo. I must have watched that demo for ages and the thought of moving that ninja around with my own joystick was more than enough persuasion. The game came on two tapes! Okay, so it would have fitted on one but System 3 recorded on both sides of each tape to be on the safe side. The box art and overall presentation was gorgeous and it certainly felt like you were getting a lot of game for your £9.99. I remember the excitement of loading it up for the first time and hoping that the full game would be as impressive as the demo. It wasn’t anything like the demo; it was a hundred times better.

The game has no sound effects at all, but Ben Daglish and Anthony Lees went to town on the music. Those tunes are just fantastic; they’ve been stuck in my head for decades and I’m not the only one. In fact, a Norwegian band called the Fastloaders have recently recorded Ninja Musicology – the complete soundtracks from The Last Ninja as well as Last Ninja 2, Last Ninja 3 and Last Ninja Remix in a rock / metal style. If you enjoy the music from these games, do yourself a massive favour and buy this album right now. I promise you will not be disappointed.

Playing the game again in 2016 I found it quite a bit shorter than I remembered, but not having to wait for the tape loader probably has a lot to do with that. Not that we used to mind the tape loader so much back then, especially with those incredible SID tunes blasting out of the TV. I remember completing the game as a kid but by using an infinite lives cheat, just for fear of getting to the final level with only one life after all that loading! In hindsight, it really wasn’t necessary to use the cheat as the game is fairly easy to finish. You shouldn’t find yourself having to replay the same level over and over (aside from the mistimed jumps across the water).

Who knows what technical wizardry was involved in creating the game’s engine, other than “Mr. Expert Cartridge” John Twiddy himself. Each screen is quickly assembled on the fly by cleverly placing and repeating assets; the result somehow looking hand-drawn. We’d seen games with huge isometric maps before (Spindizzy, Nightshade and the like), but here was a proper landscape to explore. Just look at the animated waterfalls in the Palace Gardens!

With such impressive graphics and sound, one might expect the gameplay to be a bit of a let-down. While not to everyone’s tastes, the balance of exploring / collecting, puzzles and combat is just right. Some would argue that it isn’t that much fun to play (especially crossing the stepping stones), but it kept me entertained for months as a kid. I recently played through the whole game again (twice) and thoroughly enjoyed every second of it. The control system is very good.

Although its sequel Last Ninja 2 is arguably superior in every way, the Far Eastern setting with its ornate scenery makes the first game the prettiest of the series in my opinion. It is a piece of history and a work of art; a milestone in game development that pushed the C64 further than anything before. It set a new standard for 8-bit games and became an instant classic, rivaling early Amiga games in terms of its graphics. Remember, only a few years earlier we were playing Jupiter Lander and Jack Attack on the same hardware.