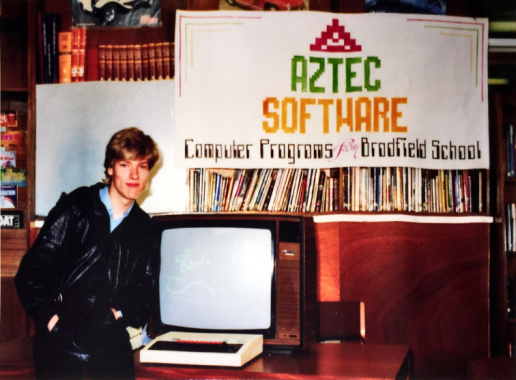 When did you realise you wanted to get into game industry and how did it happen?

Becoming one of the Commodore 64 scenes so-called  ‘Brat Pack’ of young talented stars in the early 1980s you largley managed to avoid going down the route of tried and tested arcade clones to make your living, was this down your employers at the time [Alligata], or did you set off with your own set of ideas from the beginning?

Your games were identifiable as being “by you” for their slick presentation, ahead of their time graphical routines and “polish and presentation “, though one particular game, or series was “definitely by Tony Crowther” for even more obvious reasons. The game I’m thinking of is ‘Black Thunder’. Thirty years after the event would you like to tell us how we came to be thinking what we ‘were all thinking’, all those years ago (or were we going Loco)?

The magazines of the 80’s would always like to play You and 80’s counterpart Jeff Minter against each other but we know better than that. We know old pals with an admiration for each other’s work any day, what we’d like to know however is have you ever wondered how things would be today if you had stayed ‘solo’, or ‘independent’, as Mr Minter has, or as close to such a thing as is possible in today’s business model. What if Wizard developments was still alive today?

You dipped into the world of computer-game music production in the 1980’s with the WeMusic company along with Ben Dalglish. Can you explain how this partnership came to be and how it fitted with your game development projects at the time?

If you could bring back one of your classic 1980’s titles in 2017 for HD re-master which would it be and why?

There has been an ever growing interest over 15 years or so to look back at the ‘glory days’ of our youth, the gaming culture both of the arcades and what we were playing in the home, and those that made the games that became our lives during those teenage years. Books, films, magazines and dedicated websites seek out those responsible for the entertainment of the dedicated followers.  How do you feel about this?

Did you think your work from over 30 years ago would still be remembered with such fondness?

Did your vivid creative imagination that led to such imaginative fantasy concepts such a Killer Watt & Gryphon ever envisage just what a 21 century videogames playing world would look like all those years ago?

Please tell me what different roles you have had during your time at Gremlin?

When the company changed to Gremlin Interactive in 1994 focusing on the 16bit era you produced many classic games what was your favourite game you made at this time and why?

What is the funniest thing and most frustrating thing that happened to you at Gremlin?

What is the favourite Game you have worked on during your time at Gremlin?

Creativly speaking, you were an  active user of Compunet in the 80s, putting entertaining work on there for others to enjoy, were you ever tempted to jump feet first in the rapidly maturing demo scene of the C64 and then the Amiga?

Do your own kids ever play your earliest games, if so how do they react to them, having been born “after the event” as it were?

Speaking of “after the event”, have you ever googled yourself and did you like what you found?

As a gamer and fan of game coding heroes of the past, I find myself collecting works of my favorite software houses from the 80s as an ongoing hobby, do you have any favorites from the past be it Software houses or individuals whose work you admired or games you enjoyed playing and whose games did you buy or collect during those earliest days?

Do you keep a copy of all your released games in their retail boxed format for prosperity and as a personal historical record of “everything you ever did?”

Check out the Ian Stewart Interview of Gremlin click here