I was going through some old Magazines and found this:

As bad quality check out the text version: 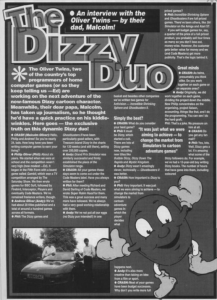 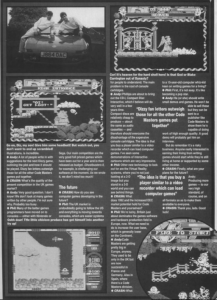 An interview with the Oliver Twins – by their dad, Malcolm!

The Oliver Twins, two of the country’s top programmers of home computer games (or so they keep telling us – Ed) are working on the next adventure of the now-famous Dizzy cartoon character. Meanwhile, their dear papa, Malcolm, has taken up journalism, so he thought he’d have a quick practice on his kiddie-winkles. Here goes – the exclusive truth on this dynamic Dizzy duo!

CRASH (Malcolm Oliver): Hello, Philip and Andrew! So you’re nearly 24, lads. How long have you been writing computer games to earn your living?

Cor! It’s heaven for the hard shell hero! Is that God or Blake Carrington out of Dynasty?

Philip Oliver (Phil): About six years. We started when we were at school and the competition wasn’t very high (how modest – Ed). It began in the Fifth Form with a board game called Gambit, which won a TV competition arranged by The Saturday Show. We then wrote games for BBC Soft, followed by Firebird, Interceptor, Players and eventually Code Masters. We’ve remained freelance writers, though.

Andrew Oliver (Andy): We’ve had about 20 titles published and a total of around a hundred games across all formats.

Phil: The Dizzy games and Ghostbusters II have been particularly good sellers, with Treasure Island Dizzy in the charts for 120 weeks (and still there), selling over 250,000 copies.

Andy: Grand Prix Simulator was similarly successful and firmly established the place of the Simulator range.

CRASH: All your games these days seem to come out under the Code Masters label. Have you always written for them?

Phil: After meeting Richard and David Darling of Code Masters, we wrote Super Robin Hood for them. This was a great success and many more have followed. We’ve always had a very good working relationship with them.

Andy: We’ve not put all our eggs (no Dizzy pun intended!) in one basket and besides other companies we’ve written two games for Activision – Incredible Shrinking Sphere and Ghostbusters II.

CRASH: What do you consider your best game?

Phil: It must be Dizzy, which started a cult. There are lots of Dizzy games now, including new titles like Bubble Dizzy, Dizzy Down The Rapids andMystic Kingdom.

CRASH: How important is Dizzy to you?

Phil: Very important. It was just what we were aiming to achieve – to change the market from simulators to cartoon adventure games in which the player decides what happens next.

Andy: It’s also more creative than taking an idea from a film or sport.

CRASH: Most of your games have been budget successes. Why don’t you write more full priced games?

Phil: Incredible Shrinking Sphere and Ghostbusters II are full priced games. There’ve been others, like Ski Simulator on the Amiga and Atari ST.

If you sell budget games for, say, a quarter of the price of a full priced product, you probably sell four times as many so you don’t lose out, money-wise. However, the customer gets better value for money and we (and Code Masters) get more publicity. That’s the logic behind it.

CRASH: As twins, presumably you think alike. Do you work together on each game or on separate ones?

Andy: Originally, we did work together on each game, dividing the project down the middle. Now Philip concentrates on the organising, project liaison, accounting, things like that, and I do the programming. You can see I do the hard graft.

Phil: That’s a joke. No pressure on him at all.

Go on, Diz my son! Give him some headbutt! But watch out, you don’t want to end up scrambled!

CRASH: Do you get any fan mail?

Phil: Yes, lots. Well, Dizzy gets a lot. It’s amazing what some of the Dizzy followers do. For example, we’ve had a 12-year-old boy writing Dizzy books. The number of hours that have gone into them, including coloured illustrations, is incredible.

Andy: A lot of people write in with suggestions for the next Dizzy game, outlining the plot and how it should be played. Dizzy fan letters outweigh those for all the other Code Masters games put together.

CRASH: What’s the quality of the present competition in the UK games market?

Andy: Very good question. I don’t know! We don’t look at many games written by other people. I’m not sure why. Probably too busy.

Phil: Many of the better games programmers have moved on to consoles – either with Nintendo or Sega. Our main competition are the very good full priced games which have been out for a year and are then released as budget. Ghostbusters II, for example, is challenging our software at the moment. As we wrote it, we don’t mind too much!

CRASH: How do you see computer games developing in the future?

Phil: The UK market is undoubtedly going to follow the US and everything is moving towards consoles, which are easier systems for people to understand. The main problem is the cost of console cartridges.

Andy: Phillips are about to bring out the CD-I, Compact Disc Interactive, which I believe will do very well in a few years time. Compact discs are relatively cheap to produce – about the same as audio cassettes – and therefore should overcome the disadvantage of the expensive console cartridges. The idea is that you buy a player similar to a video recorder which can load computer games. I’ve seen some demonstrations of interactive cartoons which are very impressive.

Phil: Other new technology to look out for are the Virtual Reality systems, where you’re not just looking at a 2-D image but you stand in a 3-D world and you can see behind things.

CRASH: What does 1992 and the increased EEC market potential hold for Code Masters and yourselves?

Phil: We’re lucky, Britain just about dominates the games software and hardware production field in Europe, now. What we need to do is increase the user base, which is generally lower on the Continent.

Andy: Code Masters are getting pretty big in Europe, anyway. They used to be only in the UK but are now successful in France and Germany. Also in Spain, where there’s a Code Masters division.

CRASH: What [would you say] to a 15-year-old computer whiz-kid keen on writing games for a living?

Andy: He (or she) should write small demos and games. He won’t be able to sell these but they can be sent to a publisher like Code Masters to show them he’s capable of doing work of high enough quality. A good demo will probably get him an interview.

But do remember it’s a risky business. Anyone really interested in earning their living from writing games should start while they’re still living at home or supported by some other income.

CRASH: Finally, what are your plans for the future?

Andy: Producing more games – to our very high standard, of course, and on all formats so as to make them available to everyone.