Interview with quackgyver by Peter Ward

Astrojone is a game design studio that aims to create what we call “Lost Cartridge Games” – i.e. games that feel like they could’ve been popular franchises had they not been lost in a dusty old box only to be rediscovered today. We always aim to style and design our games according to pre-2000 game design formulas ideas and culture. We’ve only been around for a couple of years, but we’re doing everything in our power to try to live up to that goal.

We’re currently working on Zookeeper – a 32-bit handheld-inspired adventure RPG that takes place in a Zoo. You step into the shoes of respected zookeeper Perry Jones as he solves the mystery of the kidnapped Ape King, and inadvertently uncover a conspiracy that takes him into every nook and cranny of the microcosm that is the Chimney Park Zoo. The release currently estimated release date is July 4th, 2019.

I think I was 4 or 5 years old, visiting friends of the family when their oldest son showed me Kid Icarus on the 8-bit NES. I was too young to really comprehend what was going on in the sense of it being a game with rules, limitations and boundaries. To me it looked like a window into a strange world with strange people and creatures, and seemingly limitless possibilities for exploration. I guess that this is where my obsession with microcosms in games originally came from.

Like most people in the early days of the internet I’d spend a lot of time trying to get my hands on free games and software, and many of the games that I found at the time were made with the game design toolkit Klik & Play. If you used the free version of Klik & Play, your game builds would get a splash screen informing the user of the software that was used to make the game. Next thing I know I’m using Klik & Play, followed by a cascade of other game development tools. I was captivated from that point on.

Following Klik & Play I got into QuickBASIC, then RPG Ace Adventure, then OHRRPGCE, then RPG Maker, then Game Maker, then Multimedia Fusion, then Construct, then Python, then HTML5 and so on. It’s good to have tried most major toolkits, since they each have their strengths and it’s good to know what options there are when embarking on a new project.

Our current game was made in RPG Maker MV, which is a great but limited toolkit. If you have a vision for the aesthetic and gameplay that isn’t completely in line with what RPG Maker MV wants you to do, you’re looking at a lot of heavy modifications to achieve your desired results. In our case we’ve really gone out of our way to modify our games in ways that are still within the scope of what the toolkit expects you to do, and with only a few minor programmatic modifications for interface tweaks.

We’ve got quite a hefty roadmap ahead of us. Next in line is an MS-DOS like horror adventure, a Sega Genesis/Mega Drive-inspired ‘80s anime sci-fi role playing game, an sci-fi interactive fiction (text-based) game and a NES-inspired adventure game. We’ll see whichever comes first, depending on who’s available for work and how our current project goes.

We previously made the Windows 95-based office simulator Payroll which is currently available on Steam, and before that I worked in Barkley with Tales of Game’s Studios. I’ve also been peripherally involved in other projects, but these are the main ones.

Too many to mention. I grew up on MS-DOS and the earliest Nintendo machines, but I tried to get my hands on whatever I could. There was so much obscure and intriguing hardware back then.

BlueByte’s Albion and Gremlin Interactive’s Realms of the Haunting – hands down. Albion is a fantastic, beautiful and incredibly well-written RPG that never received the critical acclaim that it deserved, and Realms of the Haunting is a very intriguing horror adventure game with a complex story that also fell short of the reception that it deserved. I’d recommend anyone who’s interested in aspects beyond the purely gameplay-mechanical to give them a try. They’re available on GOG and Steam respectively.

I mostly game on PC nowadays. There are so many console exclusives that I’d like to try, but since I spend most of my time developing games, I ironically enough wouldn’t have time to play through all the console games I’d want to try.

Knowing how hard it is to make games I’d feel really bad calling someone’s game the worst I’ve ever played, but I will say that there are a lot of games that have received universal praise where I couldn’t understand what all the hype was about. I’ll leave it to you to imagine what games it might’ve been!

Albion and Realms of the Haunting! You already did an interview with Ian Stewart from Gremlin so you’ve scored some points regarding the latter, but I’d love to see you feature these titles specifically! 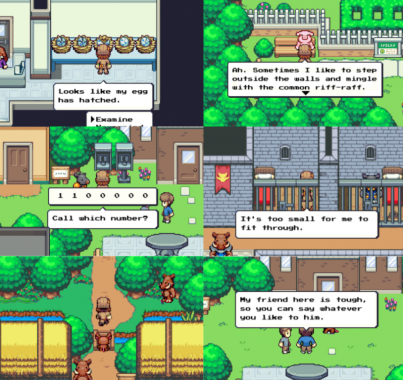