Based in Scotland, UK

Z-Exemplar is a side-scrolling shooter in the tradition of R-Type, Gradius, Nemesis and other classic arcade games from the past. Borrowing its aesthetic from the computers of yesteryear (specifically the Sinclair ZX Spectrum) Z-Exemplar combines bright, bold, 8-bit pixel art with frantic action and an epic mission to conquer a galaxy of almost 1000 planets.

Z-Exemplar was concieved as a love letter to the ZX Spectrum. Proudly retro, the game embraces the limitations of its 8-bit inspiration to deliver a fast-action, guns-toting, laser-blasting quest with intuitive gameplay and long-lasting appeal.

But it’s not just nostalgia for its own sake.

There is something hugely appealing in the 8-bit aesthetic, something that can be absent in photo-realism. There is space for interpretation, for imagination and a vague assemblage of pixels can evoke in players a different emotion from that engendered by more detailed, distinct images. With the added vibrancy of the ZX Spectrum’s colour palette, this pixellated aesthetic gives Z-Exemplar’s visuals a unique and distinctive feel.

On its surface Z-Exemplar’s gameplay appears simple – shoot anything that moves and collect the booty they leave behind – but the over-arching goal of the game is anything but. The player is tasked with conquering all 961 planets that make up a hostile galaxy with each planet’s defences uniquely configured. As the player explores the outer reaches of the galaxy, the defences become stronger and enemies more lethal and numerous. There is abundant challenge in Z-Exemplar, challenge that grows with the player’s experience.

To turn the battle in their favour the player can access an arsenal of over 20 upgradeable weapons that transform their basic fighter craft into a devsatating war machine. Selecting the right loadout for each planetary battle is essential.

Z-Exemplar is developed by Suminell Studios, a compamy with many years of industry experience in game design and development.

My first gaming experience was probably on the Atari 2600. I remember playing games like Combat, Pitfall and Space Invaders to death when I was pretty young. 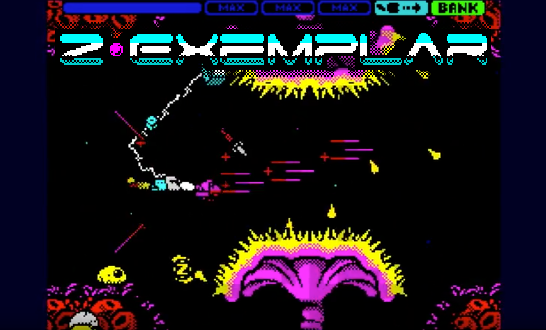 My parents bought me ZX81 for my Christmas and it came with a few games written in BASIC that you could “break into” and examine the lines of instructions that made the thing work. It was my first experience of seeing behind the curtain, as it were, and it wasn’t long before I was copying bits of BASIC and building my own (way too ambitious for 1K of memory) games. Soon after I got a ZX Spectrum which had mind blowing array of colours (15) and more memory than anyone could ever hope to fill (48K) so I continued to create my still overly ambitious projects on that. 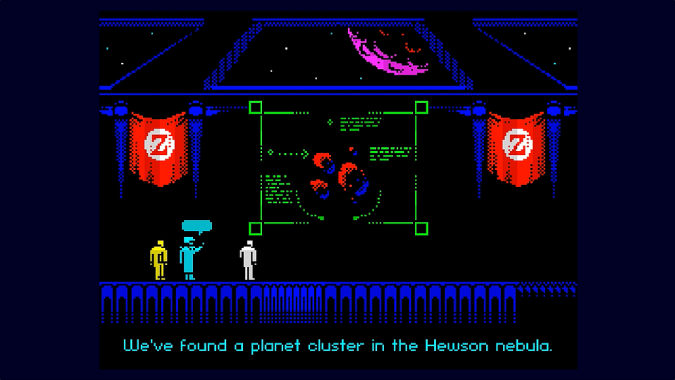 I never really saw myself as a programmer – still don’t. I could never get my head around Z80 assembly language and I was more interested in the art and design side of things. When I was programming on the Spectrum I relied heavily on a program called MCoder 2 which compiled basic into machine code. It could be fiddly but i became pretty adept at it and I’d like to think the games I created back then could have passed for games written in machine code. As for the art side of things I wore out a few keyboard membranes using Melbourne Draw! 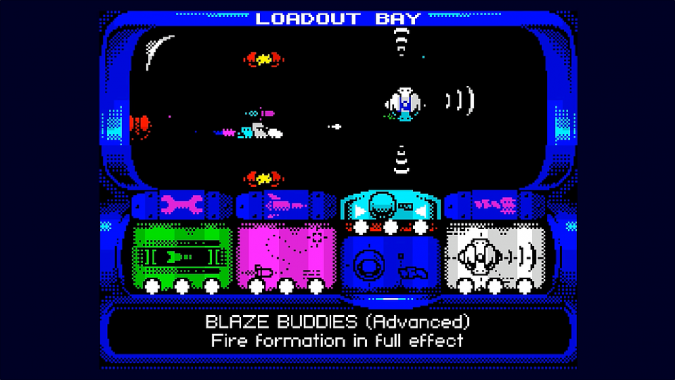 My aim with Z-Exemplar was to try and recreate some of the feeling of playing an authentic ZX Spectrum game but without some of the quirks that might not be quite so appealing to gamers today. I guess the main hurdle is trying to strike a balance between keeping it looking speccy-like but also giving it a contemporary feel. I love that pixel art is thriving these days and I hope that people can get onboard with how Z-Exemplar looks and enjoy the game which, ultimately, is what’s most important. 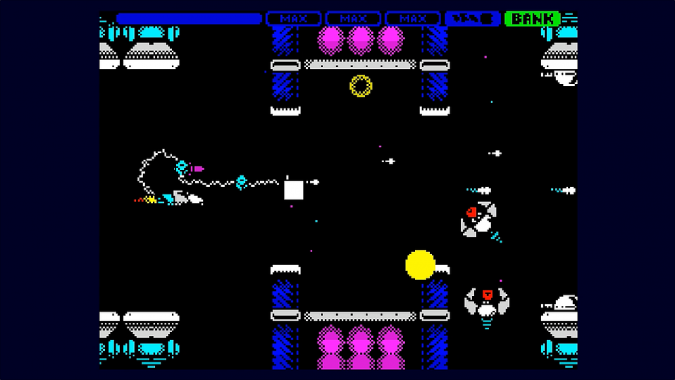 I’m not sure – I haven’t really thought that far ahead. I love the speccy aesthetic and I’d love to make another game in that style but if it turns out nobody wants that then I’ll have to think of something else. I don’t see much point in making games nobody wants to play. 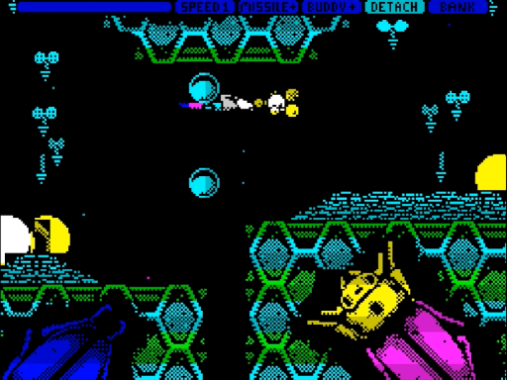 I’ve been fortunate to have had some kind of career in games development but I’d say the game I’m probably proudest of is Harlequin which was released on the Atari ST and Commodore Amiga in the early 90’s. 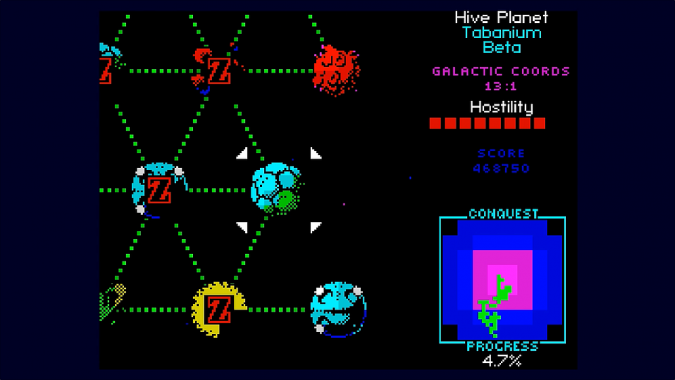 Probably the ZX Spectrum but I loved the N64 just for the quality of some of the games. 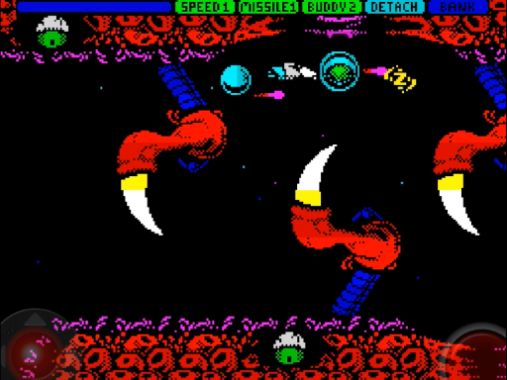 Is Banjo Kazooie considered retro now? I’m never sure. But if so then it’s Banjo Kazooie. I just feel that game is the pinnacle for the 3D platformer, a genre I love. So many great ideas that are so well executed and there’s a kind of organic feel to the design. Incredible game. 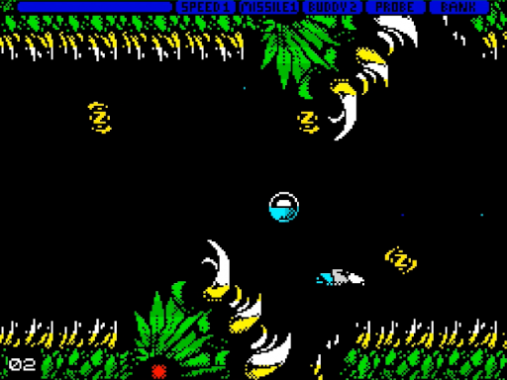 I play games on the Mac mostly these days. The last console I owned was an Xbox 360 and I was a sucker for Fallout 3 and Skyrim – games that I am  utterly in awe of! I am looking forward to eventually getting some free time to invest in Fallout 4. 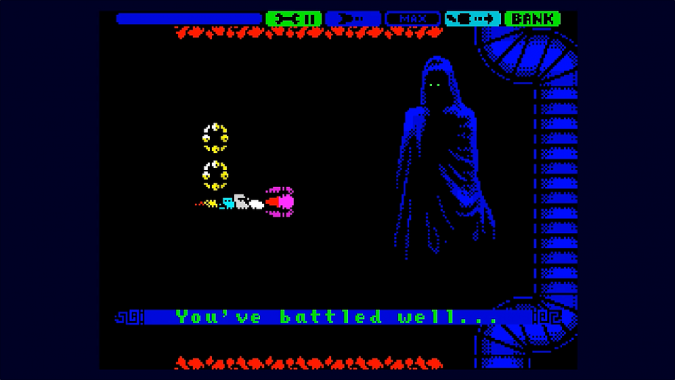 I’ve made a few clunkers in my time so I shouldn’t really throw stones from inside my glass house, but for the sheer cynicism of it I’d have to say World Cup Carnival of the ZX Spectrum. It was a football game released to coincide with the Mexico ’86 World Cup that came bundled with a mountain of posters and stickers to try and distract you from the fact that it was basically a re-hash of Artic Software’s football game from a few years previous. Pretty bad. 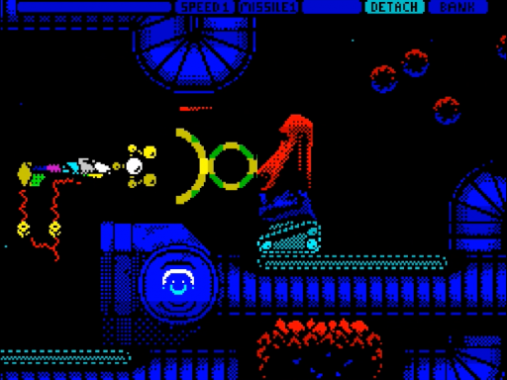 I think Retrogamesmaster does a great job of shining a spotlight on games that may have slipped from memory. You’ve certainly covered a few that I played back in the day but which I’d forgotten about and seeing them again, and reading your experiences of playing them is great fun. So in that respect I’d say keep up the great work.
Also I’d love to see more features on the development teams of the past. I really enjoy the reading the articles on Ocean and Sensible and there are loads more influential teams out there who must have great stories to tell. How about Microsphere or Denton Designs?
We will see what we can do 🙂 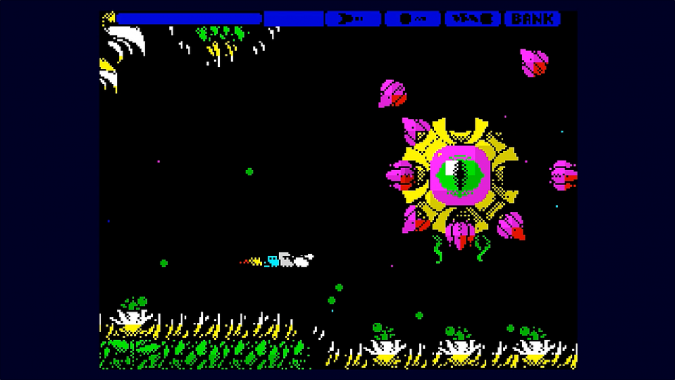