Founded in 1983 by Martin Alper, Frank Herman and Alan Sharam, Mastertronic went on to become one of the UK’s biggest home video game publishers of the 1980s. The company’s marketing strategy of putting games on shelves at the low price of just £1.99, when most other games sold from £4.99, resulted in booming sales and massive profits for the London based company.

This Kickstarter aims to produce both a standard volume and an enhanced collector’s volume detailing the history of these games.

We are slowly reaching out to various folk who were involved with Mastertronic games whether it be programming, music or cover art.

To date the following generous people have offered to contribute to the content of the books:

Pete: “Welcome to Retro Gamesmaster thank you for sparing time from your busy schedule.  Let’s get this interview underway”

Star Wars! A strange answer to be sure and one that definitely requires some elaboration. Growing up in the 70s and 80s meant playing computer games inside the house and playing with Star Wars action figures when to told to ‘go outside and get some fresh air’. It also helped with developing hand skills through building cardboard and wooden spaceships for the Star Wars figures to wage battles against one another. But then one day in the 1985, a high school teacher showed us Elite on the BBC. It was a year later before I owned my own copy for the Commodore 64. It was the best game I had ever played and it still holds a special place in my heart. Flash forward to 1999. I found a book by Steve Sansweet called “The Star Wars Action Figure Archives” and bought it straight away. It detailed all of the different Star Wars action figures produced up until that time. Flash forward again to late 2013. Following news that Elite 4 (Elite: Dangerous) was coming, I renewed my interest in Elite and found that it had been released for a dozen or more of the retro computers that I now owned in my collection. I bought as many variants as I could find to play on the original hardware. It was difficult to work out how many variants of Elite and its successors there were. One couldn’t simply find a reference book to help with building a collection. The solution? Write one myself in the style of “The Star Wars Action Figure Archive” that chronicles all of the different versions and variants, hence the nod to that book by using the term “Archives” in this retrogaming series. 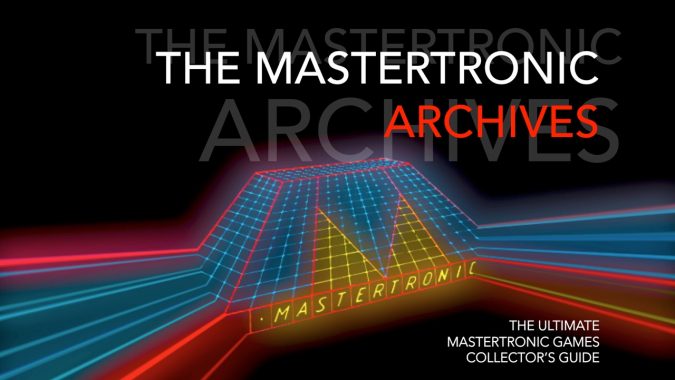 I started initial work on the book around 18 months ago, although most of the research has been during the past six months. It has been fantastic to try and build up a collection of such a diverse range of games in both genre and quality, plus its been a good way to test many of the 8-bit era joysticks for my game controller book. Mastertronic have a good reputation for being ‘pocket-money’ games, but not necessarily a good reputation for consistent quality. One you-tuber mentioned that the publisher was referred to as Masterchronic and having recently played many of the games as ‘research’ for the book, I can understand the sentiment. Fortunately there are some real gems amongst them too which I hope shows through in our book. Anthony Guter, who was Mastertronic’s financial controller during much of the 80s, has helped immensely with building a complete list of games for inclusion in the book. 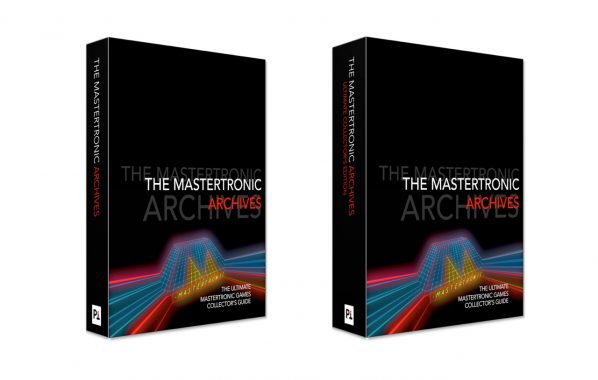 This is the first book written about Mastertronic and their fantastic (and not so fantastic) range of budget computer games from the 80s. There would only be a handful of kids growing up in the 80s who wouldn’t have seen or played a Mastertronic game at some point. There are some great websites that contain a wealth of information about Mastertronic games, but as a child of the 70s and 80s who remembers when many computer games came with swathes of printed material to browse whilst waiting for games to load, neither web nor digital beats browsing through a printed hardback book. One of the popular perks we’ve included blends digital with physical in a novel way by offering digital versions of the books via a physical Mastertronic ‘199 Range’ inspired USB drive in the shape of a computer game cassette. The USB cassette comes in a jewel cassette case with an inlay featuring a cover designed by 1980s Mastertronic cover artist Mark J. Brady. There are also original Mastertronic games and a Mistertronic poster all signed by another early Mastertronic artist know best for his cartoon style covers, John the Brush. 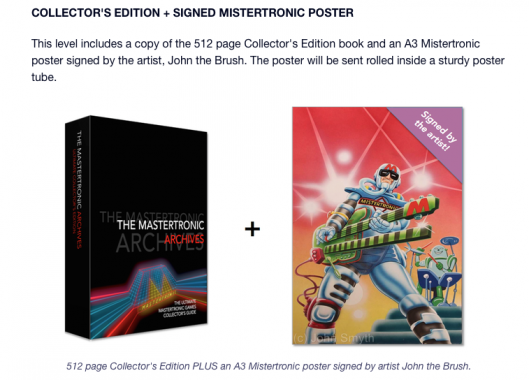 We’ve taken the somewhat unusual move to use this Kickstarter to bring a couple of books to market. There are principally two books. The Mastertronics Archives Collector’s Edition, a 512 page featuring game reviews, game credits, screen shots, cover images and more of all of the Mastertronic £1.99 releases as well as the other Mastertronic labels such as M.A.D., Americana, Rebound, Rack-It, etc PLUS the unique disk releases. The second book is a 128 page Cover Art Gallery book featuring a foreword by John the Brush and featuring a range of game covers including commentary by select original cover artists. Following some initial feedback prior to launching the Kickstarter, we decided to also offer a 256 page version of the The Mastertronic Archives, which features just the main ‘199 Range’ of games, as the 512 page book was not economical to produce at the key £25 price point. 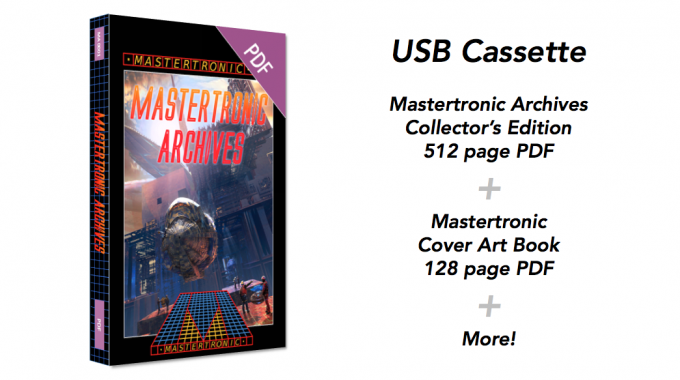 I started researching and writing The Elite Archives book in 2014. It has been a challenging book to produce as a first book, particularly because the scope of the final book is so much greater than what we originally planned. This has meant that book has taken twelve months longer than planned to write, but now that it is almost complete I am really looking forward to its release form Fantastic Books Publishing later this year. I am in the process of gathering the last few pieces of information for my first self-published book under the Player 1 Books label; “Player One – An Illustrated History of Game Controllers Volume I, 1972-1989” which is due to go to print at the end of June. I also have a short story published in a Science Fiction anthology published by Fantastic Books Publishing and a another short story included in the official Elite: Dangerous role playing game. 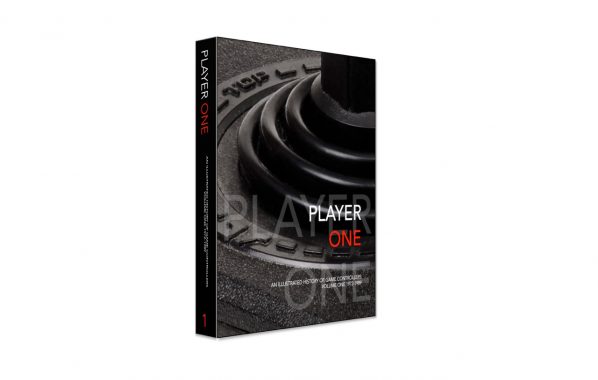 It was a long time ago now but one of the earliest I can recall would be playing games on a television that had built in games like pong and it’s derivatives. Looking back it was pretty rubbish, but it was fun enough when you were six or seven. 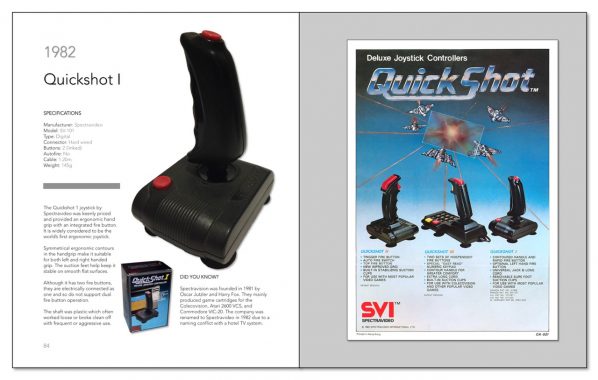 My favourite computer is the bread bin Commodore 64, which was also the first computer that I owned. I have over twenty Commodore 64 and 128 computers in my collection now and still play games on them when ever I have the chance. Of course by writing this book its now mandatory research, not gaming time. I never remember it being called a console at the time, but I’d have to rate the Atari 2600 as my favourite console of all time. The games don’t have the best graphics, or the best sound (that belongs to the Commodore 64), but the sheer quick-play fun-factor (sprinkled with a good dose of nostalgia) is unrivalled in today’s long-winded story driven games. 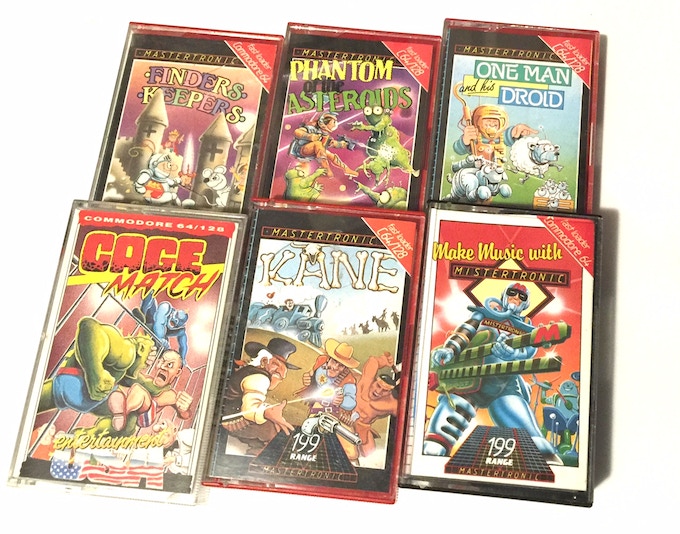 My favourite retro game is without doubt the Commodore 64 version of Elite. It has its flaws, particularly the slow frame rate when there are more than three or four enemy ships in the vicinity, but the incredible way the game is designed to suspend disbelief and create such strong immersion is to be commended even today. The manual and novella helped add to the immersion. Imagination quickly filled in any other graphical deficiencies.

I don’t have time to play very many new games, but playing Elite: Dangerous in 3D with the Oculus Rift is really an unbelievable out of this world experience!

To date I’d have to say Mastertronic’s Intergalactic Cage Match on the Commodore 64. The controls are rubbish and there doesn’t seem to be a way to stop your opponent from escaping once they start climbing the cage wall. Of course you can use that very fault to climb the wall first and win the game for yourself.

I’d like to see some more coverage on the less-popular computer hardware such as the Tatung Einstein, MSX and Dragon 32K. I’m not sure it would be as popular to many, but I believe that it is important to make sure those parts of our retro gaming history are well covered too.