Where cultists crawl, where demons dwell, where the occult… occults? you’ll find Detective Francis McQueen, the sole member of the criminally underfunded Darkside Division. When evil darkens the doorsteps of Twin Lakes City – hell, even when it just loiters around shop fronts or hangs out in shady alleyways – he’s there, ready to investigate the cases that nobody else will. He is The Darkside Detective.

The Darkside Detective is a micro-adventure game with a distinct art style and charm. It’s being developed for PC, Smart Phones and Tablet devices, and is set to be released later this year. The game consists of a series of humorous bite-size investigations into the occult and extraordinary.

The game was born at the Galway Game Jam in November 2014. Its original demo created in under 8 hours by Paul Conway & Christopher Colston. The short prototype proved to be quite popular after it was posted online, convincing the team that there was life in creating an extended game. Dave & Tracey McCabe joined the team as a writer and programmer respectively, with Ben Prunty coming onboard as a composer.

The main aim of the team is to deliver a series of small adventure stories all wrapped up into the one game. Come and join Detective Francis McQueen as he investigates the most bizarre and obscure cases that come across his desk. From the occult to the supernatural, anything is possible in this micro adventure game.

What is your first gaming experience?
My very first ever gaming experience was playing a small table top version of Defender that my sister got one Xmas. It only had two colours and terrible battery life, but it was amazing. I was never allowed to play it for very long since it was my sisters toy, but I would hover over her shoulder whenever she turned it on.

I work primarily as an artist in video games, I’m not much of a coder at all. I know a little C#, but that’s about it.
I wanted to be a video game artist since I was a young kid playing on my SNES. I was always drawing comics and robots, and I loved video games, but I didn’t automatically put the two together.
It was when I was playing Link’s Awakening on the SNES that it finally clicked. It might have been the slower pace to the game mixed with the colourful 16bit graphics of the day, but for the first time I could see someone actually had to draw the world of the game. From then on I just wanted to draw video games. 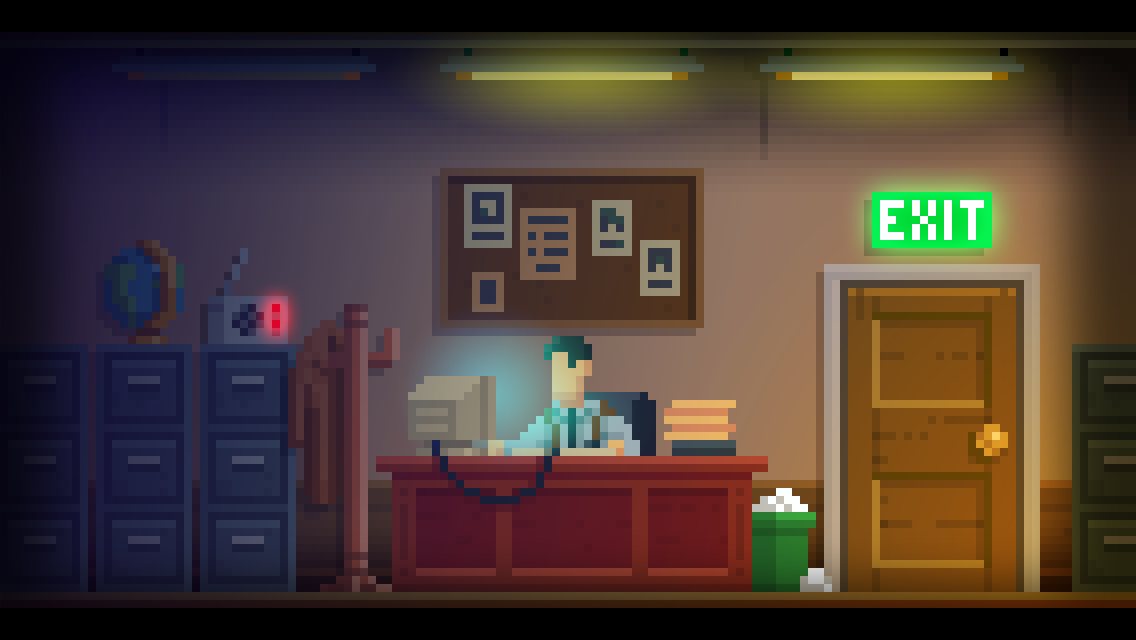 My team and I generally use Unity. It’s very flexible in the sorts of games you can create with it, it has a lot of support online and it’s great for porting to multiple platforms, too. My limited C# can go a long way in it, and Tracey, our lead developer, can make it perform magic as needed.

Apart from finding the time to build and polish the game, the main hurdle we’ve faced is the game’s design. The Darkside Detective is a classic adventure game, so the story is very important and how the game design fits around that is paramount.
We’ve gone back and forth quite a bit on some decisions after implementing them into the game, as we discovered the case files could feel either tedious or too simple, or just not make sense once it was playable. It a simplistic game on the surface, but it has had some serious design time to make it an enjoyable experience. 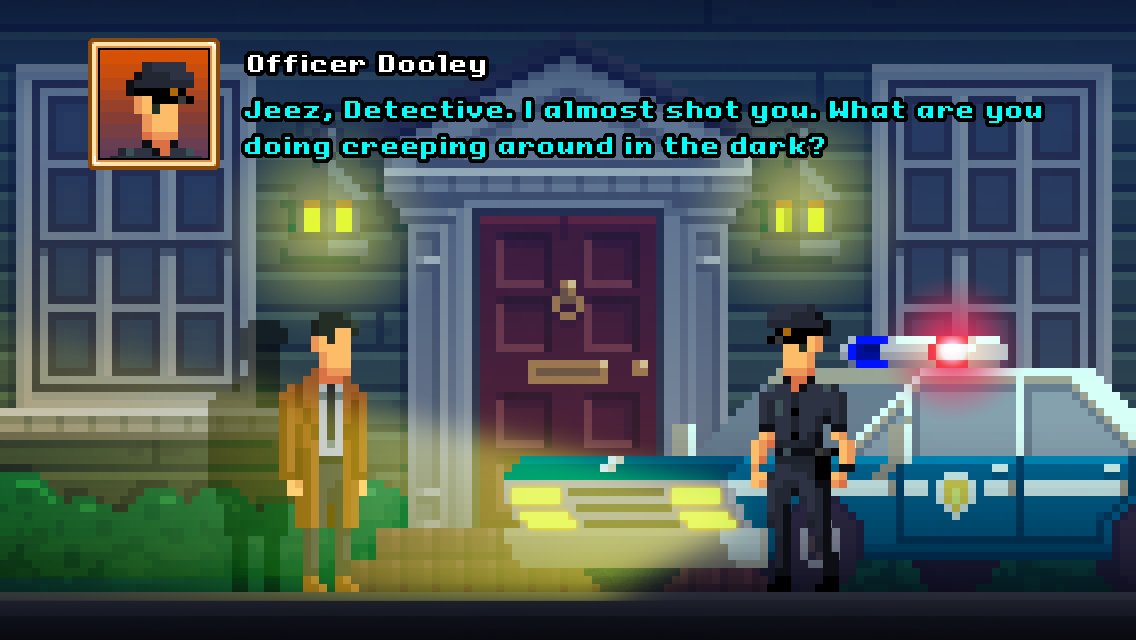 We plan to support the Darkside Detective on a number of platforms and also deliver new DLC cases for our fans. Outside of that I personally plan to move onto two other games I have in pre-production. One is called Beyond the Dunes, which is a classic point and click set in a post-apocalyptic future, and Aporkalypse Now, a comedy side scrolling shooter where you have to save the world from a super race of pigs.

As a freelance artist I’ve worked on over one hundred games. Some highlights include Gunman Taco Truck, with John Romero of DOOM fame, The Sims 3 World Adventures and Theme Park on mobile, and the Lep’s World platforming game series on iPhone. 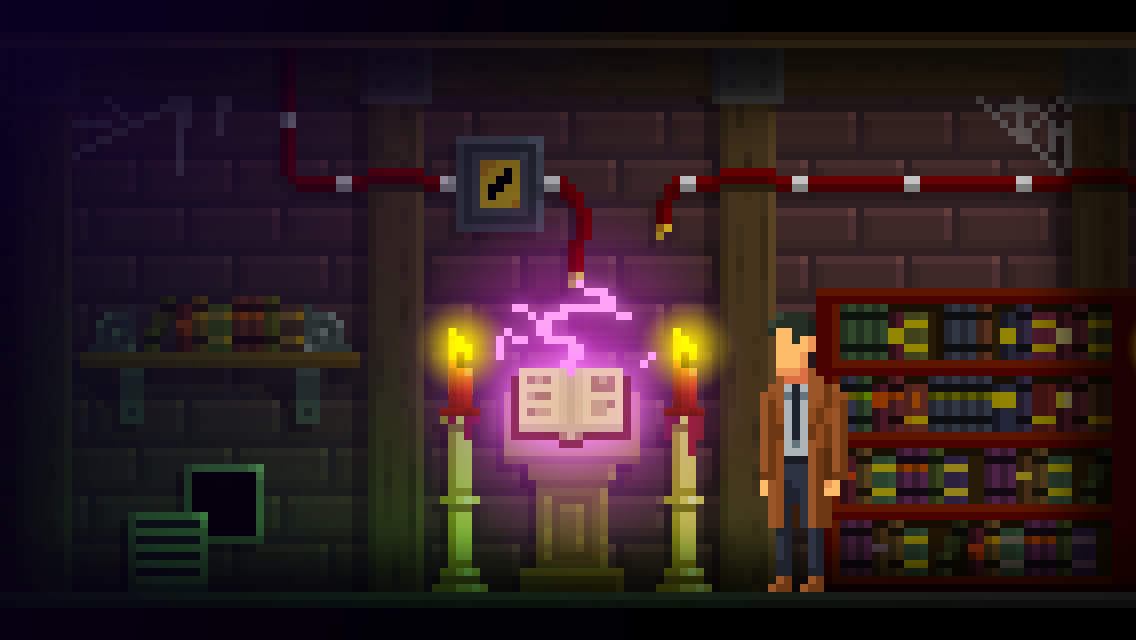 My favourite console was the SNES. It had so many good games which have left strong memories. I loved my older consoles and enjoyed the Megadrive, too, but I had the richest experience on my Super Nintendo.

My favourite retro game, which is also my favourite game of all time, is Another World by Eric Chahi. That game blew my mind when I first played it. It just did not operate like anything else at the time. Each scene was its own unique puzzle with its own set piece, it felt like a movie. I think Eric made so many distinct and strong choices visually that it still stands out as a great looking game today. I’ve bought it several times on different platforms over the years, and I’ll play it through to completion annually.

I don’t have a console that I use too much these days. I haven’t upgraded to the current Xbox and PlayStation just yet. I play a lot on PC, though. I think some current favourites are Inside, FireWatch and Devil Daggers.

That’s a tough question. I’m not sure there is a single game answer for that. I think the first game which stood out as being utterly terrible, or at the very least not living up to the promises it made, was Rise of the Robots. It look amazing for its time, but graphics couldn’t save it from being dead on arrival.

I’d like to see an interview with Eric Chahi or a feature on the development on Another World. I’d love to hear his thoughts on its lasting appeal and also how the industry has changed through out his career.