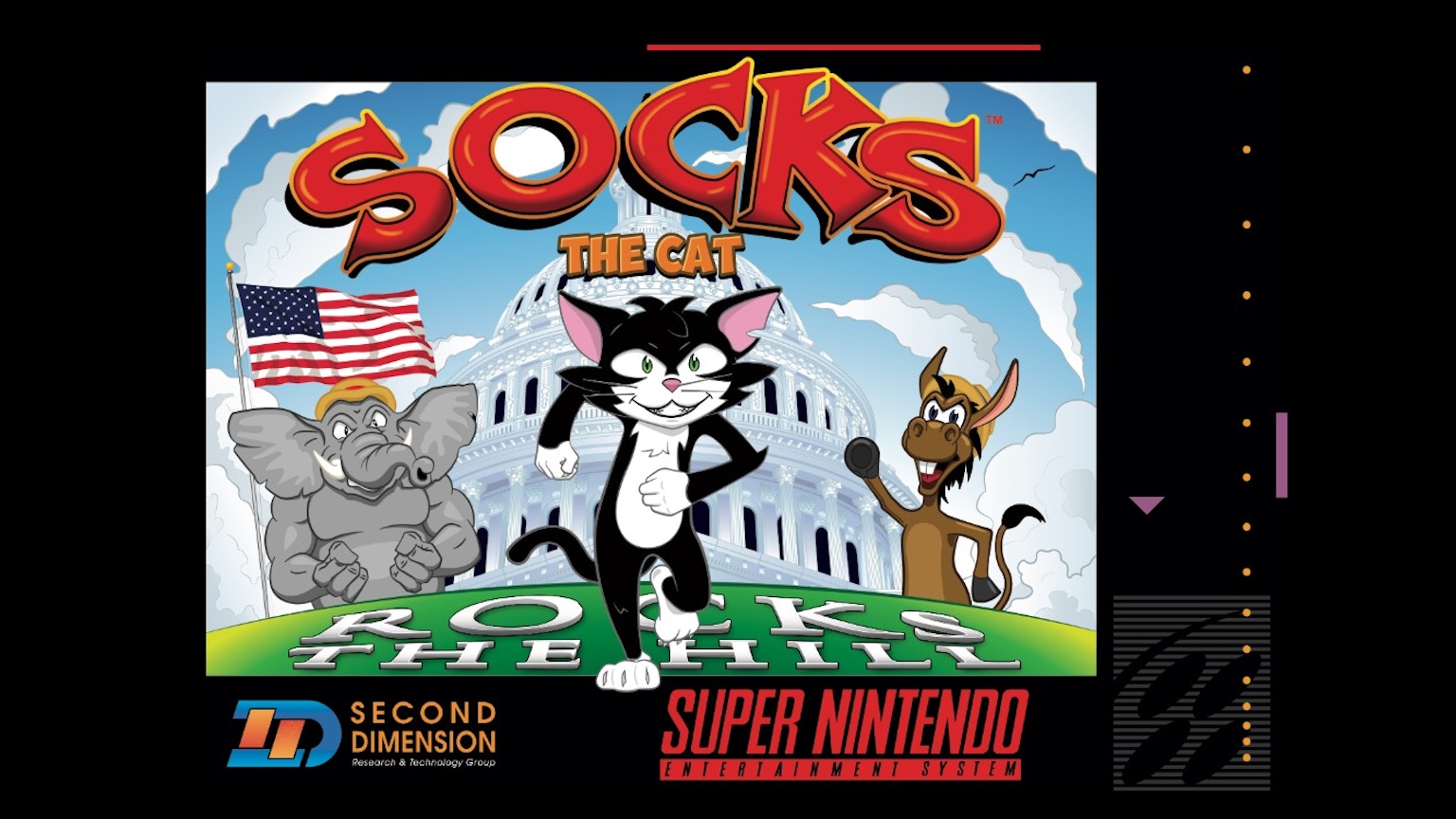 Socks the Cat is the most anticipated unreleased video game of all-time. Ever. For any platform. Don’t believe me? Grab some popcorn and “Google” it.

The premise was wacky yet simple. You play as Socks the Cat, or Socks as we affectionately call him.  The ultimate pet of the 90’s. The White House cat. The “First Pet” of the Clinton administration.  Your mission? To fight your way through the White House battling all sorts of enemies, including spies, Dobermans, protestors and satirical versions of famous political figures as end bosses. The game was set to be released on the ever popular, Super Nintendo Entertainment System or SNES in the early 90’s.

The game was well received by some, disliked by others, but all agreed it was a great theme with excellent end bosses.  Several publications reviewed the game but when the publisher closed its doors, Socks went missing.  For years. And years. And years.

20+ years later some retro gamers and enthusiasts wondered what happened to Socks and started asking questions.  There were some disagreements.  The developer said it was complete while former employees of the publisher whole-heartedly disagreed, saying the game was nowhere near completion.

Then in 2011 things got really interesting. A private collector allowed a friend to shoot some video footage and upload it to YouTube of what appeared to be the Socks the Cat video game.  Instant vitriol would follow.  While some were happy there was finally proof of the existence of the long lost game, others were upset that the collector would not release the game for others to enjoy. One thing was clear, the 20 years of speculation were over.  Socks did exist. This created even more questions.

Was it complete? Did it play well? What was the plan for it? Well those answers would start to be answered in 2012 when another collector, Tom Curtin, purchased the only known copy of Socks.  His plans were simple, he wanted to release the game. He has since teamed up with retro video game publisher, Second Dimension. Finally, hope.

Curtin would acquire the rights to Socks the Cat a couple of years later and pursue the release.  He hired a dream team of retro game experts. A publisher, a programmer, an artist, and two experts in releasing previously unreleased games.  They would work together to bring Socks the Cat, the most anticipated unreleased game of all-time to reality. And we’re off!!

My first gaming experience was when I was about 3 years old. My parents
had just divorced and my mother, brother, and I had moved to a new town
into a new apartment. My father had brought us an Atari 2600, so we hooked
that up to our small black and white CRT that was sitting on a box, which
my brother and I would spend hours trying to figure out how to play
Asteroids and Defender.

I had always had an interest in computers and circuitry at an early age,
but growing up very poor, we were only exposed to whatever our family and
friends would pass down to us. In the early 90’s, we had transferred to a
public school where they had begun teaching computers to the students. One
of our projects in the 5th grade was to make a point and click adventure
game. I don’t recall the software that we used, but it was on an Apple II
LE, I believe. The software allowed us to draw on the screen and create
clickable assets that would lead to another room. We only had to do maybe
10 screens in total, and while the software handled all of the back end
coding, it was still my first experience in designing a game. 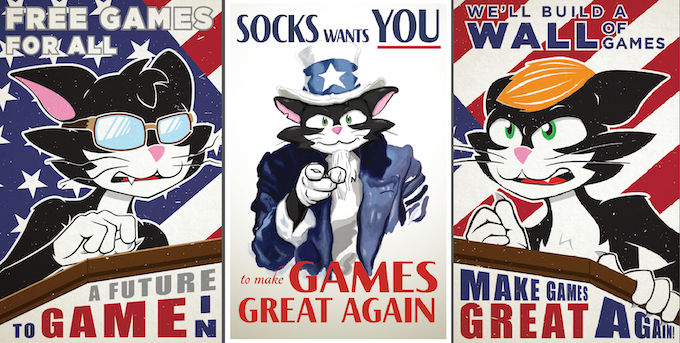 When I became a freshman in high school (grade 9), I studied Electronic
Engineering at a trade school, which had a computer science elective that
we had to take (other trades had to take blueprinting, or an elective that
related to their field of study). It was in this class where I learned how
to write code in QBasic and Borland C++. I had also learned what BBS’s
were and started to see the games that were hosted, and I knew that’s what
I wanted to do – develop software that people would enjoy using. With my
passion for gaming, it felt like a natural progression to go from
application development to game development.

When I started developing for retro consoles, I started with the Genesis
and began using a programming language called BEX, which is a BASIC
variant. The author of the tool hadn’t updated it in years, so with
permission to use his assembly library, I wrote a compiler called
SecondBASIC, which is what I use now for Genesis development. I also wrote
a graphic tool called Affinity Draw Studio that lets you create graphics
in the appropriate format for the Genesis. 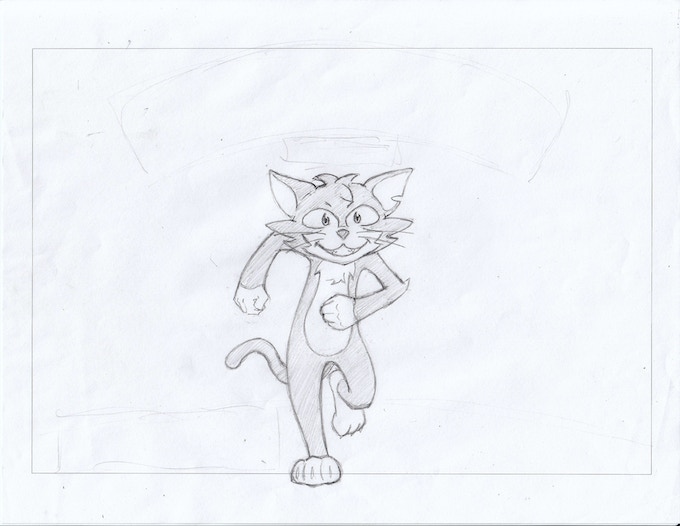 I believe this is referring to Socks the Cat, so I’ll answer based on that
assumption. With Socks, we ran into a few bugs that were game breaking.
The biggest hurdle was getting that bug fixed. We contacted a SNES
developer who had the skills to work with a compiled rom, since we didn’t
have the source code. This bug had us worried as it could have completely
ended the project.

We added 2 games to bundle with Socks the Cat on the Kickstarter campaign
– Get’em Gary on the NES and Handy Harvy on the Sega Genesis. Get’em Gary
is a prequel to Handy Harvy, but both games were inspired by Disney’s “Fix
it Felix” from their movie “Wreck-It Ralph”. Get’em Gary has been finished
since August, and is currently going through the final stages before
hitting the manufacturing process, and Handy Harvy is nearly finished and
will be going into production shortly as well

After the Kickstarter Campaign, though, the next 2 projects I’d like to
tackle are the boxing game, currently titled Project KO, and Affinity
Sorrow. Both games are slated for the Sega Genesis, but I’d like to pursue
other avenues to get them onto current platforms.


What other games have you made you made?

Aside from Get’em Gary and Handy Harvy, I had also done Hangman SG about 5
years back, and a few commission games, such as Blow’em Out for the Sega
Genesis for Retroscribe.

I’ve never been a PC gamer, with the exception of the Diablo series, so
I’ve always been a console gamer. My all time favorite console is the
Super Nintendo, but the Genesis is a close second.

That’s a tough one to answer! I’m really big into the 16 bit RPG’s, with
Final Fantasy 6, Soul Blazer, and Secret of Mana at the very top of the
list. However, if I had to choose just 1 game, it would be Mega Man 2 on
the NES. It’s a nostalgia overload every time I play it, and it’s a
fantastic game all around.

Do you still game on the current consoles if so whats your favourite
game?

While I’ve slowed my game playing over the years, I still try to keep up
with the current generation of gaming. I have the PS4, Wii U, and Xbox
One, each with a fair amount of games. Lately, I’ve been playing Super
Mega Baseball on the Xbox One, but really, my favorite game/series is Rock
Band, as I can easily play that game for 20 hours straight. Sadly, that is
no exaggeration 🙂

Every game I’ve played, I’ve enjoyed at least some part of it, so picking
a “worst” is tough. I don’t think I have a worst game ever played, though
there are some games that I prefer not to play, but that’s more genre
specific (such as first person shooters or strat/military based games).

Any and all haha! Definitely Affinity Sorrow in the future, but I would
never be opposed to any game that we’re working on to be spotlighted by
Regrogamesmaster. 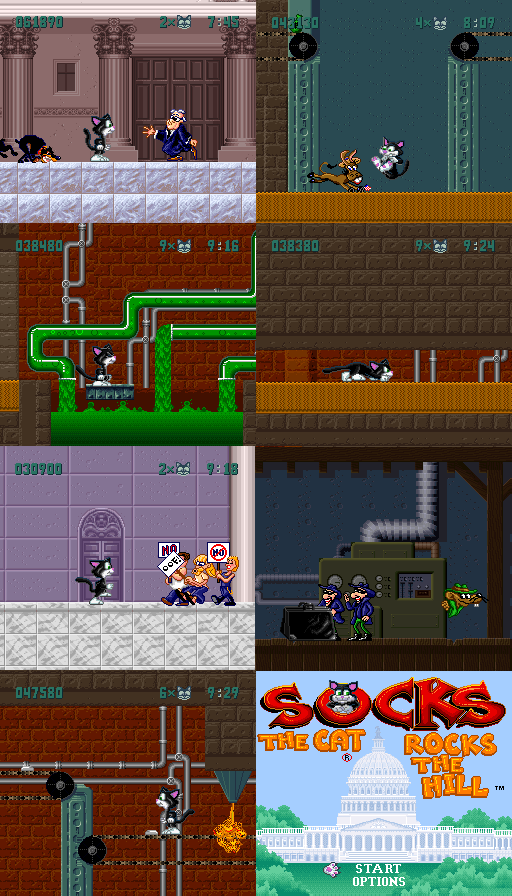