Invisigun Heroes is a multiplayer, single-screen stealth battle arena with a twist: everyone’s invisible! Predictable grid-based movement ensures that you know where you are, but other players don’t. Vigilance is key as environmental tells such as footprints and other disturbances will point out careless cadets. Using special abilities and firing your Invisigun will also momentarily give you away. Along with items and powerups, these mechanics reward stealth, trickery, reflex, forethought, deception, bluffing, and awareness. A variety of lovingly-madeenvironments, maps, game modes, and abilities combine for high replayability and a deep path to mastery. 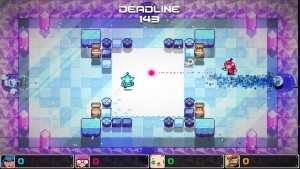 Thanks for having me! When I was very young, my family had an Intellivision console. Back then we wouldn’t have it always hooked it up – it would be stored in a closet and then brought out only when you wanted to play it. I have some fond, but blurry memories of those games. I remember a word-learning game that was a little like Centipede, and a flying shmup called Mission X. After that, my brother and I played a lot of games on our dad’s Amiga 500, and I also get very nostalgic about that platform, but games permanently solidified themselves into my life during the 8-bit and 16-bit NES/SNES/Genesis era.

I always loved messing with the resource files and file structures of whatever games we had (on the Amiga or Mac classic) to see what I could change, and it became pretty clear that to really do whatever you wanted, you needed to code. I studied computer science in high school and college, and while I worked as a web developer for many years, I still always tried to “gamify” certain aspects of the presentation. Obviously, my heart was in games, and I began to transition full time into programming them when the iOS App Store opened up.

My iOS games were pretty much all XCode and Objective C, and I used the Cocos2D framework as well. For about three years I worked at Adhesive Games on the mech shooter Hawken, and that was using the Unreal 3 engine, Flash, and ActionScript for UI. My current project Invisigun Heroes is built entirely in Unity and C#. 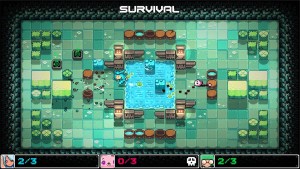 I think most of the hurdles come along with learning the ins and outs of a new platform, and this is my first large Unity-based game. I was an early updater to Unity 5, so a lot of us were (and still are) sort of guinea pigs for most of the new technologies and feature sets. This means we get useful new toys, but they aren’t as stable or predictable as older tools, with less documentation and online discussion to reference. Of course, since I’m working full time on my own game, financing it is the elephant in the room, and that’s where the Kickstarter comes in.

After the Invisigun Heroes desktop release, I hope to work with a porting team to bring it to consoles (XBox One, PS4, Wii U). Beyond that, my long term goal is to continue to make more games, and ideally with another full time person at Sombr Studio. Now I’m actually looking forward to making a game where the characters are visible, haha.

I released an arcade shooter called Last Cannon on iOS, and a fun party game called Backwords also on iOS. After that, I worked on Hawken with a much larger team (that started out really small), and a grand scope. Besides those published games, I have dozens and dozens of prototypes and ideas for iOS and the Processing environment. 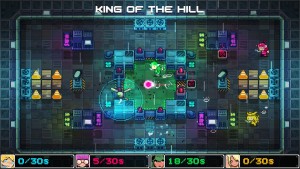 I love the Amiga – it was so ahead of its time back then! However if I had to pick, the Super Nintendo always comes to mind. It had most of my favorite games from that era, and the perfect amount of hardware power. I don’t think another console had as many games that captivated me so completely. It could just be attributed to my age at the time, but the worlds in those games felt much larger to me than modern games, even though I know this isn’t true.

That is such a difficult question. I can easily narrow it down to three: Super Metroid, Zelda: A Link to the Past, and Final Fantasy 3 (U.S.). If I was forced to pick between those, I would have to choose A Link to the Past for its lasting influence on me, and I’ve definitely played through it completely the most often. However if I had to pick a desert island game (and a second player was also on the island), it would have to be something along the lines of Dr. Mario or Street Fighter. 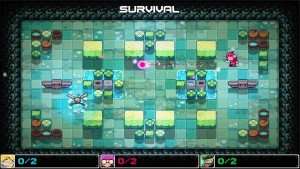 I do occasionally, but much less than before. In fact I still don’t own an Xbox One or a PS4 because every game I’ve been interested in is released on PC as well. However, my favorite “console” of the modern era is the Nintendo DS line, and that basically comes down to its extensive library of games in the genres that I love (RPGs and puzzle games). I sunk more hours into Street Fighter 4 in the last 5 or so years than any other, and I’m expecting the upcoming Street Fighter 5 to dethrone that.

Back to the Future on NES comes to mind. I think what mostly annoyed me is that so much of the gameplay had nothing to do with the film – it was almost like another game was reskinned (slightly) for its release. To be fair though, I actually played it a lot, and got really good at it. It’s weird how that worked when you were younger. You mastered whatever you had, because it was much more rare to get a game – they were so much more precious.

It would be fun to see a short retrospective or game feature on something in the Shining series by Sega. I really loved Shining in the Darkness and Shining Force.