Once every generation, in the land of Ashvyel, a rift is torn open between the realm of dreams and reality, opening a gateway to The Void through which the immortal Demon Prince Vassago and his endless hordes of demons can come through and dominate life itself. This apocalypse is only kept at bay by an ancient order that has sworn unyielding devotion to protecting all life created by the goddess, Astra: The Order of The Paladin. When Vassago is close to ripping open the barrier once again, Astra blesses a child not only with the path of light, but the path of darkness, a Paladin that can wield both Holy Magic and Void Magic, for only Void Magic can repair what Void Magic has torn assunder. Walking the path of righteousness without becoming consumed by the darkness of Void Magic is the true test of faith and loyalty. Should this chosen Paladin succeed, they will become King or Queen over Ashvyel and the next generation, until Vassago rises again.

But only two years after Divine King Arkhan overcame darkness and sealed the rift to The Void, Vassago somehow managed to shatter the barrier once more, flooding the world with demons and death. The Paladin Orders across the land fought for the people as long as they could, but ultimately their numbers have dwindled to almost nothing. Now, only the high walls of Divine King Arkhan’s capital, Dhia, and his Paladin Knights can keep the darkness from spreading beyond Ashvyel into other nations and the rest of the world.

However, a new chosen champion of Astra has arisen: her name is Destinare. Where her Paladin brothers and sisters see an endless sorrow, Destinare believes that she can not only undo what evil hath wrought upon the land, but end the immortal life of Vassago at last.

With the power of the legendary sword that transcends all barriers and all realities: Excalibur, the light of The Creator crystallized into physical form. However, legend states that anyone of impure heart who wields the blade will irrevocably corrupt the light of Excalibur, plunging the world into eternal darkness.

Whether Destinare becomes Demonic, or rises to Divinity, is up to you.

THE DARK PALADIN is a project that I have been working on for the better part of the year. Most of this time was spent in crafting the world of the game, Ashvyel, and penning its lore. It is a passion child of a love for large-scale open fantasy worlds and a rich story driven by exploration and lore. I want Ashvyel to be a world that can be traveled freely right from the get-go, and the story taken in at the player’s pace, even if that means they’ve reached Lv. 237 and amassed an armory of legendary weapons before deciding to take on their first Main Quest objective.

Most of the technical systems are totally finished and programmed into the game already (Morality system, Spells, Job Points, Stat Balancing and Levels, the entire armory of weapons, armors, crafting materials, the Gathering and Alchemy system, Mounts, and so much more!) Since so much of the core game is complete, the rest will fall into place very quickly. The money pledged would be put toward outsourcing what character, monster, and environmental artwork that I can’t provide myself to give the game a more unique look and feel, as well as commissioning programming/scripting, and paying for their licenses in commercial use. The goal is to raise the minimum needed to do what I have to in order to complete the game as listed below, though anything further raised will be put to use in implementing features that I couldn’t before.

-Thank you for having me here, glad to have the experience!

-I used RPG Maker VX Ace, because of its versatility. The code language used in Ace is called Ruby Syntax, which I’m in no way an expert RMVX Ace has a very large community with tons of helpful people. I came in very late to the game with this tool but in the short time I’ve worked with it I’ve been very pleasantly surprised at what the outcome has been, and I think anyone who picks up the demo will enjoy it.

What hurdles did you have making The Dark Paladin?

-Script errors! Script errors everywhere! Sometimes Ruby Syntax scripts will clash either with each other, or with the engine’s base scripts, which will cause a very abrupt crash of the game. My biggest hurdle has been investing all of the time it takes to repeatedly play through every single feature and quest in the demo to find all of these problems, and then trial/error the fixes, and then play through from the beginning to find the next one. The demo isn’t exactly a short one, either, so if it takes a couple of hours for me to speed run through everything that’s a lot of time invested.

-Well after its completion I want to put all of my energy into marketing it, but as for another game project, I’ve wanted to design a good horror game for a long time. I really, really miss the days when there was no shortage of them to choose from, but now the genre really is hanging on a thread of hope to keep going.

-The Dark Paladin will be my first completed project. I’ve started a few others to basically flesh out ideas for future reference but nothing that I’ve carried to the end.

-My favorite computer was an 8GB RAM, i7-4790K 4GHz quadcore with a GTX 760 4GB model. I had a lot of fun with that one, it was a beast, but ultimately had to sell it to pay bills and haven’t been able to replace it since.

-I own a PS4, and I invest more time than I’m proud to admit on Final Fantasy XIV: A Realm Reborn/Heavensward. I’ve also recently (finally) picked up Alien: Isolation and Witcher III. Waiting to get into Fallout 4 when I have the time to really dive into it, but if I started it now I wouldn’t get anything done with The Dark Paladin! 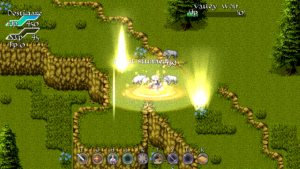 -I can’t recall one particular game that I thought was absolutely awful, but I’m just generally not impressed with games that don’t really have a storyline. There are some games that have the illusion of a story, but nothing really happens. You have to find out the truth about what happened, so you go from point A, to B, to F, to M, and when you finally reach point Z you fight a boss, it’s happily ever after, and you still don’t know what the blazing hells happened and didn’t learn anything about anyone’s motivations. So, I’d say those are the worst games for me.

-Oh, I don’t know, Troll-Tuesdays, where you give an awful game a satirically positive review? Ooh, or weekly riddle giveaways! Or, you know, something practical like a weekly ‘meet the staff/bloggers’ section/posting, maybe couple it with a short, upbeat video interview.